Monday, May 23
You are at:Home»Sports»Football»Suarez-Evra reunion adds fuel to bitter rivalry 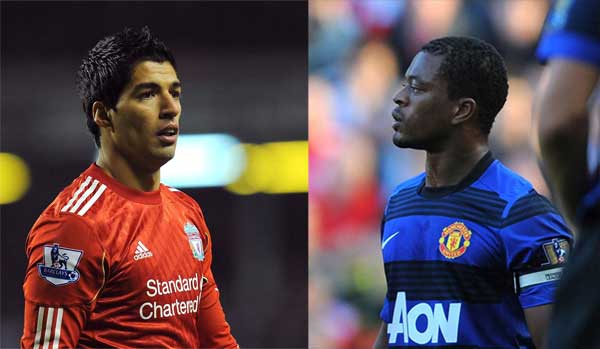 LONDON: Luis Suarez is preparing to run the Old Trafford gauntlet when the Liverpool striker faces Manchester United for the first time since his ban for racially abusing Patrice Evra.

The Uruguayan returned from his eight-match suspension when he appeared as a substitute against Tottenham on Monday but is expected to start for the Reds in the latest instalment of the northwest giants’ bitter rivalry.

The two clubs met in the FA Cup at Anfield only a fortnight ago, with Liverpool winning a largely trouble-free game 2-1.

However the tie was soured by the relentless barracking of Evra by Liverpool fans, and the subsequent arrest of one fan on suspicion of making racist taunts to the French international.

Mindful of the potential for today’s fixture to turn ugly, both United and Liverpool officials have attempted to defuse tensions with calls for calm.

“I thought everyone involved in the FA Cup tie at Anfield played their part in making sure that the match was played in the right way, so let’s make sure that happens again this weekend,” Dalglish said.

“I’m sure people will want to talk about Luis Suarez but he accepted his ban, served his suspension and returned against Spurs on Monday.

“It’s time for all of us to draw a line under what happened and move forward.

“People are already speculating on the pre-match ceremony, but from Luis’s point of view we have spoken to him and I know he will shake the hand of Patrice Evra and the other Manchester United players before the game.”

Ferguson meanwhile spoke this week of his surprise at the re-emergence of racist incidents in the English game.

“I don’t understand at all where it’s coming from,” Ferguson said. “This is a moment where we have to take stock and we should do something about it if it’s surfacing again, and be really hard and firm on any form or shape of racism.

“There have been a couple of examples recently which is not good. In 2012, you can’t believe it. It was obvious maybe 20 years ago and the improvements have been for everyone to see.”

While the animosity between Liverpool and United means Suarez is unlikely to be given an easy ride today, fullback Glen Johnson has backed his teammate to cope with the bearpit atmosphere.

“It is a tough place to go Old Trafford. Luis is a strong character and he will try to let his football do the talking,” Johnson said.

“He has had a long break now and hopefully he will be fresh and ready to put in a performance.”

Although City demolished Villa 4-1 earlier this season, manager Roberto Mancini has said his team have been warned against complacency as they attempt to maintain their lead at the top.

“We will have a difficult game, but if we have the attitude that we had against Fulham, we will do well,” Mancini said. “I think the all the remaining games are difficult.” — AFP