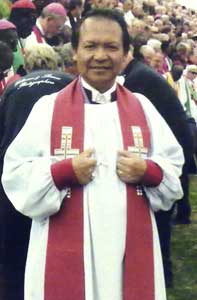 GLOBAL COMMUNION: Bolly is seen before a photo call for the Lambeth Conference in England. He will today become one of 38 Primates in the worldwide Anglican Communion.

THE Right Reverend Datuk Bolly Lapok will be installed as the fourth Archbishop of the Anglican Province of South East Asia today (Feb 12).

He will be the first Sarawakian to hold the post.

The 13th Bishop of the Anglican Church in Sarawak and Brunei, which is known as the Diocese of Kuching where the seat of the bishop lies, hails from Sebemban longhouse in Sri Aman.

He received his early education at Selanjan and Pantu Primary School before continuing at the Government Secondary School in Simanggang.

His long theological training began in 1971 at the House of the Epiphany, Kuching. He graduated with a Diploma in Theology offered by the Australian College of Theology in 1974.

The following year, Bolly was made a deacon and subsequently ordained priest later that year at St Luke’s Church, Sri Aman.

In 1978, he took charge of Mamut, one of the most unenviable of remote rural parishes then, from his mentor, the late Bishop Peter Howes.

It was here Bolly met his late wife, Lily Unchau, who was a major inspiration in helping to shape the character and bearing of his ministry.

From Mamut, the young couple moved to Sibu where Bolly served as Vicar from 1980 to 1984.

In 1984, under a scholarship from the United Society for the Propagation of the Gospel (USPG), Bolly furthered his studies at Westhill College, Birmingham, UK, where he majored in Pastoral Theology and English, graduating with distinction.

Upon his return from studies, Bolly was sent to take charge of St Thomas’ Parish in Bintulu, where he mobilised a congregation comprising largely young migrants from around Sarawak and undertook the construction of a new and bigger church building to replace the then dilapidated wooden church, and came up with one of the finest in the Diocese. 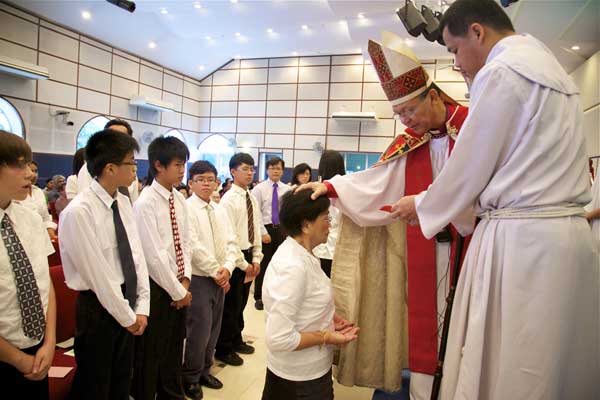 In 1991, he was appointed Archdeacon of North Sarawak and Brunei, a post he held until his appointment as Assistant Bishop, when he took charge of the House of the Epiphany as warden.

After having worked with a cross-section of both urban and rural parishes in the Diocese, Bolly was equipped with a keen theological and pastoral sensitivity to root the Gospel in the complexity of local cultures.

He was entrusted to serve in the various key committees of the Diocese as well as the Province of South East Asia and also often represented the latter to some of the ministries of the Anglican Communion Office in London. 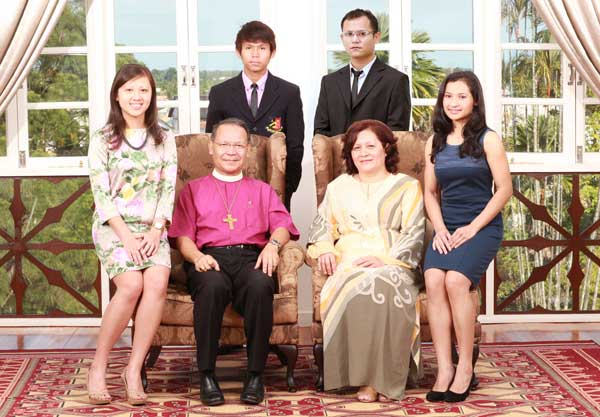 A vociferous reader, Bolly studied New Testament Greek through correspondence and obtained a Licentiate in Theology from the Australian College of Theology as well as advanced studies in Theology where he was awarded the degree of Scholar in Theology.

In 2001, the USPG again awarded him a scholarship to do post-graduate study in Missiology at the University of Birmingham where he obtained a Master of Arts with distinction.

From there, Bolly enrolled for a doctorate but well into its third year, he was compelled to put it on hold due to the untimely demise of Lily, and his election as the Bishop of Kuching in 2007. 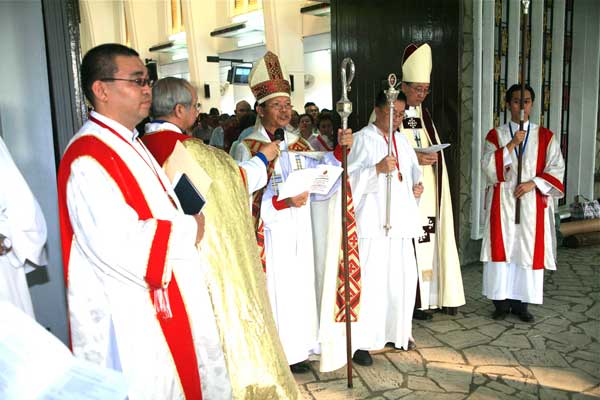 A PRAYER: Bolly blesses the city of Kuching and the Diocese during his enthronement service in 2007.

Upon his installation as Archbishop today, Bolly will take over from the Bishop of Singapore, the Most Reverend Dr John Chew, and as one of the 38 primates in the worldwide Anglican Communion.

Bolly recently shared with thesundaypost the details of his calling and ministry, the challenges he has faced and his plans for the Anglican Communion in South East Asia.

Q: How did you first discover your calling?

A: I come from a family background where there is a heightened sense of spirituality and the beyond was a major part of our lives. I remember during my childhood, people from villages around would come to see my grandfather regarding their dreams and the omens they met in the jungle, as in those days, it was the religion of the dead.

During my higher secondary education, that was the time when pop culture such as ‘Beatles mania’ invaded the generation. I remember that despite the hype, I still found time to go to church when my friends viewed it as a definite ordeal and generally dismissed worship as an unnecessary preoccupation altogether.

It was when going to church as a bouncy youth where I first felt an inkling of my calling to serve in the sacred ministry.

Hardly a hymn went without some amusing discordant at a worship heavy with High Church overlays, but in the whole motion of Sunday Communion, I somehow found a compelling ‘still small voice’ and a refreshing retreat from the pop culture invasion and battle against mathematics.

Q: What would you say were the challenges you’ve faced over the years?

A: Well, in the course of my pursuing this calling, I have faced many challenges. But the most memorable and painful one occurred when I was sent to further my studies under the USPG scholarship in Birmingham in 1984.

I left behind my young wife, who was pregnant with my second child, and year-old son. During my absence, I didn’t get to witness the birth of my daughter.

In another study exposure, my mother passed away and I didn’t get to participate in the funeral because I was away in Birmingham.

In those days, it was not fashionable for you to negotiate with the Bishop, so I remained in the UK because I felt it was the continuation of the study and I was on a scholarship.

Another incident was when I ought to be rejoicing because of my election as Bishop of the Diocese of Kuching but it was also the same time my dear wife passed away, leaving me and my three young children, Nigel, Fiona and Nathanael behind.

That was the darkest hour of my life and I almost gave up. Had it not been for the constant support of my devoted friends and the prayers of the Church, it would have been the end of the line for me.

Q: How does it feel to be the first Sarawakian to be Archbishop of the Province of South East Asia?

A: There are few Provinces in the Anglican world that are as diverse as the Province of South East Asia. Given so heavy a responsibility and so high a calling, I feel so small and so unequal. This is definitely one of those mysterious ways of God.

It is not about a celebration of an ambition achieved and dream fulfilled, or a result of intelligent voting and a victory over tribalism or racism or any of those bigotries, or exclusively about Bolly Anak Lapok. No. Ultimately, it is all about God and His Church. That, I believe is at the heart of all installations.

Q: What are your plans as Archbishop?

A: Although one would have plans within himself, ultimately, we cannot programme God to do what I want. The scripture says: “God is spirit. The wind blows wherever and whenever it pleases, He wills.”

Nevertheless, what I plan to do is to continue where my predecessor had left and to rejoice and strengthen the foundation already laid. In the local churches in Kuching, we are planning so much and we trust that God would bless all these plans to fruition. I wish to be as close as I can be to the clergy, the people, pray together with them, serve them as a pastor.

Q: Upon your installation, what will your tasks be?

There are 38 Primates in the worldwide Anglican Communion and this region of the globe has been entrusted under my pastoral jurisdiction.

I will be taking over a Province which, after 17 odd years, has now been blessed with a distinct sense of purpose and direction. I intend to pursue and build upon the same.

As a strong believer in teamwork and surrounded by dedicated leadership and colleagues, both the Diocese as well as the Province are in good hands for the next phase of their journey.

The Service for the Installation of the fourth Archbishop of the Anglican Province of South East Asia will be held at 5pm today at St Thomas’ Cathedral, Jalan McDougall.