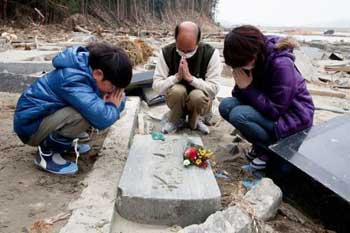 A family prays by a grave in Miyagi prefecture's Ishinomaki on April 11, 2011, a month after the tsunami devastated the area. - AFP photo

A year after whole neighbourhoods full of people were killed by the Japanese tsunami, rumours of ghosts swirl in Ishinomaki as the city struggles to come to terms with the awful tragedy.

One reconstruction project appears stalled because of fears the undead spirits of those who perished last March will bring bad luck.

“I heard people working to repair the store became sick because of ghosts,” Satoshi Abe, 64, said, gesturing to a half-repaired supermarket.

“People died everywhere, here and there. The city is full of such stories,” he said.

In some parts of this once vibrant fishing port, signs of life are returning — houses are being rebuilt, businesses are re-opening and children are back at school.

But with around a fifth of the 19,000 who died across the northeast having lost their lives in this small city alone, few think it can ever be normal again.

Shinichi Sasaki said the memory of March 11, 2011 never leaves and it is this persistent memory that creates the “ghosts”.

“That day keeps coming back to your mind,” he said.

“If you know someone who was killed, and the death was so sudden, you may feel that person is still there. I don’t believe in ghosts but I can understand why the town is rife with rumours.”

One taxi driver, who did not want to give his name, told AFP of his unwillingness to stop in parts of the city that were all but wiped out by the enormous waves of last March, because he worries that his customer will be a spirit.

A woman who lives in the city said she had heard stories of queues of people who can be seen rushing towards the hills as they try again and again to escape the waves, an endless replay of their last, fruitless minutes.

Counselors and academics say a widespread belief in ghosts is fairly normal in the aftermath of a large tragedy and forms a part of the healing process in a society.

Cultural anthropologist Takeo Funabiki said it was only “natural” that stories of the supernatural abounded in the wake of such an event.

“Human beings find it very difficult to accept death, whether they are inclined by nature to superstition or are very scientifically minded,” he told AFP.

“A sudden or abnormal death, anything other than someone dying in bed of old age, is particularly difficult for people to comprehend.

“When there are things that many people find difficult to accept, they can find expression in the form of rumours or rituals for the dead, amongst other things.

“The point is that it takes the shape of something that you can share with other people in your society,” he said.

For some of those who lost loved ones, the traditions that usually accompany death in Japan have served their purpose.

Shinto priests have been called upon to console the souls of the dead and ease their passage into the next world before they purify the places their bodies were found.

At the Buddhist festival of Obon in mid summer, offerings were made at altars as those left behind readied to welcome back the spirits of lost loved ones, who they believed would return to this world to visit for a few days.

But other people have struggled to make sense of their loss.

Koji Ikeda, a therapist and lecturer at the Academy of Counselors Japan, said “survivors have various complex emotions — fear, anxiety, sorrow or desire for the return of deceased people”.

“It is possible that a whole lot of emotions that people cannot fully cope with lead to ‘projections’ of spirits” he said.

“Pent-up emotions need to be expressed in order for people to be able to adapt to the new reality and move forward with their grief.”

While few in the city will talk openly of actually having seen a ghost, many are prepared to accept spirits could stalk the deserted streets.

Yuko Sugimoto says she is not particularly superstitious and has not seen any ghosts. But still she has no doubt they could be there among the shadows.

“Many people who were leading normal lives died suddenly,” she said. “I’m sure they must find that difficult to accept.

“It would be strange if you didn’t hear anything about any of them.” –AFP