Sunday, November 27
You are at:Home»News»Sarawak»Bottled water runs out in Miri due to panic buying 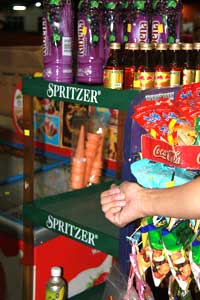 OUT OF STOCK: A shopkeeper points at the empty rack for Spritzer bottled water.

MIRI: Supermarkets, grocery stores and even petrol stations across Miri have run out of bottled waters as residents rushed to ensure adequate water stock for their own use following fears that water supply might be cut off for a few days.

The panic buying is triggered by a water supply disruption which occurred when diesel from a premix plant along Miri-Bintulu Road leaked and contaminated Sungai Liku, which is Lembaga Air Kawasan Utara (Laku)’s main source of raw water for Miri and Bekenu.

The spill was discovered at about 8.30pm on Saturday, and Laku’s staff immediately stopped pumping water from the river. The management of the premix plant was ordered to stop the leakage and an earth bump was built to stop the diesel from following into the river.

“Some even bought ice cubes to use in cooking. Other than that, people also grabbed packet juices and milk.”

A customer, Semawi Madeli from Tudan, when met at one of the grocery stores, said water supply had already been cut off earlier yesterday.

“I don’t know if the news is true or not but I heard there will be no water for the next two to three days.”

Sarif Abdullah, who lives in Piasau, said he rushed out to grab some bottled waters when he caught wind of the water issue.

“I am just not sure what is really going on,” he said, looking worried when he left the store empty handed.

A lady from Kampung Pujut, Taman Kerbau here, Ayu Rahayu, did not even step into the grocery store when she first learned from other disappointed customers that bottled waters had run out. She is now feeling the heat.

“This is the fourth shop I have stopped to check if there are still bottled water available. The water supply to my house was cut off at around 2pm.”

Kueh seller Azrin Ren came in shortly after and asked the shopkeeper for bottled waters, but was told that there were none left.

He revealed that bottled waters had run out at stores in Kenyalang, Century and even Petronas stations after searching at these areas earlier on.

“I heard from my cousin that there would be no water supply for the next few days. I just want to grab some bottled waters for the elders in my family,” he said, pointing to the half empty fridge with fruit juices and milk at the store.