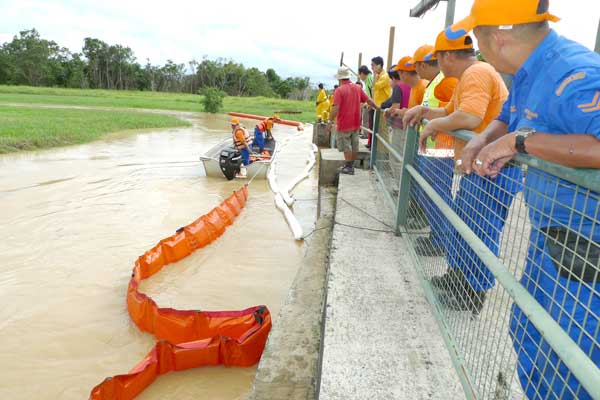 CONTAINING SPILLAGE: The emergency response unit setting up booms along a stretch of Sungei Liku.

MIRI: The price of bottled water skyrocketed to RM25 per box from the usual price of RM8 here and in Bekenu yesterday caused by panic buying as taps ran dry following the leakage of diesel from the pipeline of a premix plant along Miri-Bintulu Road into Sungei Liku, the main source for treated water for the whole area.

The plea by city mayor Lawrence Lai who is also a director of Lembaga Air Kawasan Utara (Laku) here, to traders not to hike the prices fell on deaf ears as every retail shop ran out of bottled water and stalls selling bottled water mushroomed along several roads. 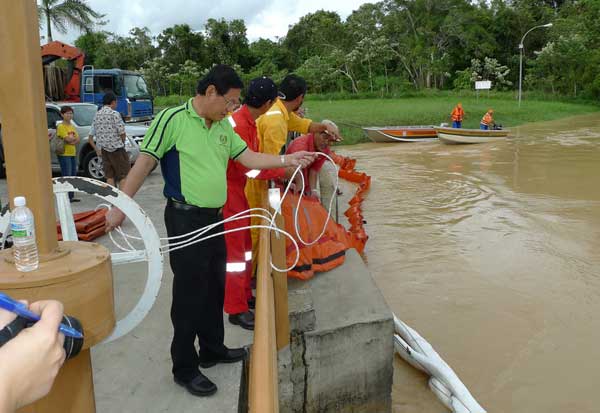 However, the mad rush for the water turned out to be unnecessary as Laku issued a statement last night that water supply would be back to normal today as the treatment plant at Sungei Liku had resumed full pumping into the distribution system last night.

“Laku Miri at 6pm has already pumped the water from the river source for testing. However, the authority cannot release the supply until they are satisfied the water quality complied with the industrial standard safety.

“If the water quality complied with the standard, hopefully supply will resume tomorrow (Monday),” Lai said when contacted by The Borneo Post last night.

Personnel from the emergency  response unit comprising Laku, Shell and Petronas were on the ground almost immediately to contain the spillage, he added. 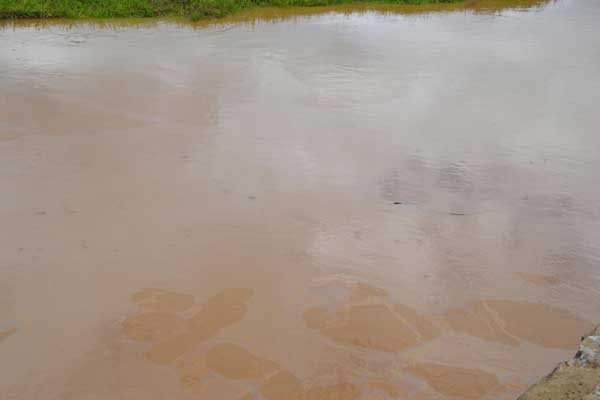 WATER CONTAMINATION: The diesel film on the water surface.

The contamination was detected at about 8.30pm on Saturday when Laku staff manning the water treatment plant smelt diesel from the river.

They immediately stop pumping the water from the river at raw water intake pump house to stop contaminated water getting into the plant and traced the source of the spillage. 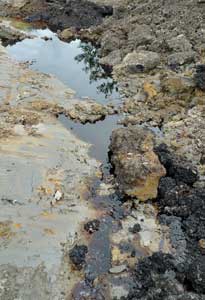 OIL SPILL: The diesel sipping out from soil.

Laku manager Lo Su Onn here told the press yesterday more than 300,000 people here and in Bekenu were affected by the stoppage of the treatment plant.

According to Lo, consumers in Miri and Bekenu used around 125 million litres per-day and to immediately make up for the supply disruption Laku had started pumping eight underground water wells which had the capacity of producing 80 million litre per day.

Another measure taken by Laku was to pump water from Bakong River and divert it into Sungai Liku to flush out the diesel.

However, as Bakong River and Sungai Liku are 13 km apart it would take at least six hours for the diverted water to reach Sungai Liku.

Assistant minister of Water Supply Datuk Sylvester Entri Muran when contacted yesterday said that the ministry was looking seriously into the situation and was assessing the situation.