Sunday, November 27
You are at:Home»News»Sarawak»Minister calls for stringent measures to prevent recurrence of water source contamination 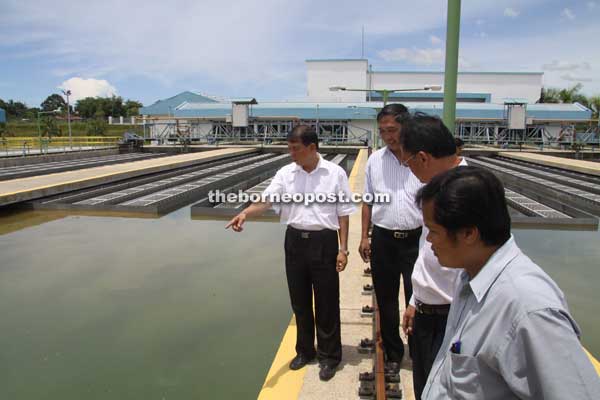 MIRI: The danger of building a premix plant so near Sungai Liku, the main source of raw water for Lambir water treatment plant, must be addressed immediately after a leakage of its fuel pipeline which spilled thousands of litres of diesel into the river forced the plant to shut down Saturday.

Minister of Energy, Green Technology and Water Datuk Seri Peter Chin in stating this yesterday added that vigorous mitigation measures must be put in place to prevent a recurrence of the water pollution which panicked 300,000 residents in Miri and Sibuti over the weekend.

The water disruption caused by the diesel contamination clearly showed the fragility of the water supply system here.

“The question is whether pollution from a premix plant located at such close proximity to the source of water supply should be allowed to exist at all? We are always subject to such vagaries when we do not take a holistic approach to maintain tight control over pollution sources, whether it’s here in Miri or elsewhere.”

Chin hoped the authorities concerned would carry out a strict audit on possible pollution sources to water intake areas and recommend remedial actions for immediate implementation.

“The more we compromise on matters such as pollution of our environment, the dearer we have to pay for the decay that will eventually set in. Let us always err on the side of caution when it comes to our natural environment.”

The incident unfolded on Saturday night when Lembaga Air Kawasan Utara (Laku) staff noticed oil patches near the water intake at Sungai Liku, and immediately shut down the plant.

Laku staff traced the source of pollution to the premix plant, and quickly stopped the flow of diesel from a burst hose. Quick all-out effort by Shell, Petronas, Laku personnel to contained the crisis and minimised the contamination of the river.

Rumours of water supply disruption for at least a couple of days spread like wildfire on Sunday, and panicked resident rushed to buy bottled water. This sent the price of bottled water skyrocketing to RM25 per box. The normal price was only RM8.

Sanity returned yesterday as the Module IV plant was back in business yesterday after the authorities contained the source of the pollution.

Meanwhile, Chin’s political secretary Datuk Sebastian Ting said the incident should be a lesson for all, and thanked all those who toiled to restore the water supply yesterday.

“The incident highlighted two things: people panicked due to rumours, and the lack of a good system to keep people informed of what is happening.”

Ting said providing speedy, accurate information for the public by the relevant authorities was important in any crisis situation, and all government departments or agencies should have such a system in place.

“Those involved should not act as though nothing happened. The public want answers, and we are here to serve the people.”

Upon receiving confirmation that pumping of water had resumed at 7pm on Sunday, he immediately called up the electronic media and put up a notice on his Facebook to inform the general public that the water supply would be back to normal the following day.