Sunday, November 27
You are at:Home»News»Sarawak»Team formed to investigate water contamination in Miri 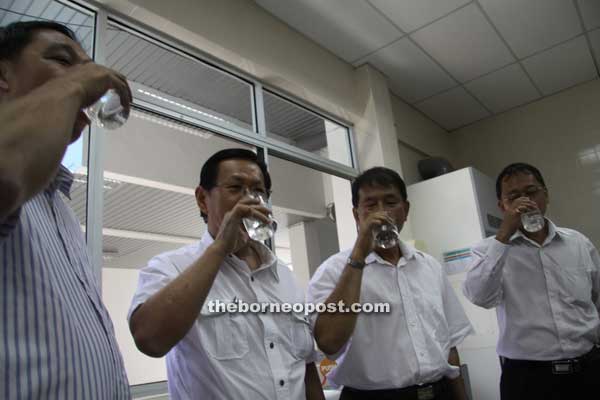 ALLAYING FEARS: (From left) Loh, Lee, Ting and Wong drinking the treated water at Lambir Module IV plant to prove that it is safe for consumption.

MIRI: With sanity restored and water taps running again in Miri and Sibuti, the Ministry of Public Utilities has set up a team to investigate the cause of the diesel spill onto Sungai Liku on Saturday night, and make recommendation to prevent a recurrence.

Its Permanent Secretary Ubaidillah Abdul Latip said in a press statement that the team would comprise personnel from various departments and agencies.

A press release issued after a post-mortem meeting at the Miri Resident Office yesterday stated that Lembaga Air Kawasan Utara (Laku) shut down its treatment plant at 8.30pm on Saturday following discovery of oil patches in Sungai Liku at the pumping intake station.

Borewells were tapped but it could only produce a third of the total daily demand of 125 million litres, thus causing water shortage in Miri and Bekenu.

Assistant Minister of Communications Datuk Lee Kim Shin, who spoke at a press conference after the post-mortem meeting, said water supply resumed at 8pm on Sunday, except for those on higher ground.

It was gradually restored as pumping was ramped up at Module IV of the Lambir Treatment Plant on Sunday night.

To prove this, Lee, political secretary to the Minister of Energy, Green Technology and Water Datuk Sebastian Ting, and Laku general manager Loh Su Onn drank the water at the treatment plant yesterday.

Everyone in Miri and Sibuti was on the edge on Sunday when rumours spread like wildfire that the taps would run for two to three days following the water contamination. This sparked panic buying of bottled water everywhere it was sold, and its price skyrocketed from the normal RM8 to an insane RM50 per box!

Their anxiety was sky high partly because there was no official word from the relevant authorities.

Lee said this communication weakness must be addressed by the authorities concerned.

They plugged the leak at source and then worked around the clock to install booms to prevent the spilled oil from entering the intake pumps.

Lee said Petronas, Shell and a licensed waste removal contractor helped contain the pollution by removing earth at the premix plant site, and the pollution was contained at 6pm on Sunday. The all-clear sign was given to resume pumping at the intake station for treatment at 7pm.

Laku said the long shut down of Module IV and the sudden surge of water had caused sediments in the water mains to be stirred up, resulting in turbid water in certain places.

Wong said flushing had been carried out, and assured the public that the turbid water was not due to the contamination.

“Laku management sincerely apologises for the inconvenience caused to all customers. We appreciate the understanding of many members of the public, and those who called to give encouragement.”