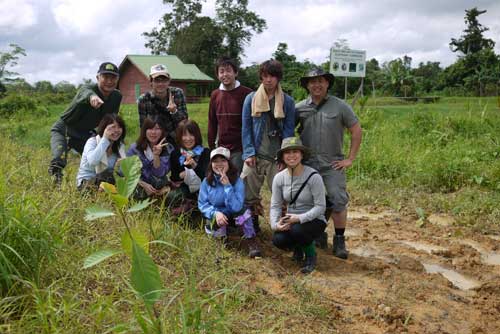 The Japanese students pose with the elephant's footprints as evidence of the newly established corridor being used by the elephants in their migratory movements.

KOTA KINABALU: The fragmentation of the forest habitats is one of the key challenges to ensure the survival of the Bornean elephants in Sabah.

The ‘Melapi elephant corridor’ in Sukau has proven that even a strip of land 50 meters wide makes a difference to facilitate the migration of the Bornean elephant herds in Lower Kinabatangan.

The Borneo Conservation Trust (BCT) is a non-profit NGO established in 2006 and was incorporated under the Trustee’s Ordinance 1951, Cap. 148 (Sabah).

BCT relies wholly on funds and grants that is provided by individuals and corporations, to enable it to implement conservation and research works. 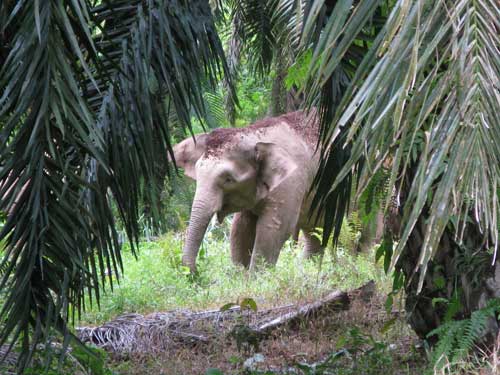 The establishment of the Borneo Conservation Trust (BCT) was first mooted as an unprecedented Malaysia-Japanese effort to re-acquire the important alienated lands in the wetlands and riverine forests in order to allow the movements of Bornean elephants and orang utans, the flagship species of Sabah.

“We are very happy to know that the elephants are now able to pass through the land using this corridor to migrate from one key habitat to another, when previously it was a very narrow bottleneck,” said Alfred.

“This collaborative effort is an example where the private sector can work with us and the NGOs. We welcome the opportunity to work hand-in-hand with companies and organisations keen to play an active role in supporting and contributing to Sabah’s wildlife conservation initiatives,” said Dr Laurentius N. Ambu, the director of the Sabah Wildlife Department.

“With the re-establishment of this corridor, the potential human and elephant conflict in the villages and plantations is also reduced,” concluded Ambu.

This week, students from the Nihon University Japan, planted more than 100 trees within this corridor to facilitate the movement of the orang utans within the fragmented habitat in the future.

The activities of the students were coordinated by Borneo Conservation Trust Japan (BCT-Japan).

With continuous diligent effort in the next three years, a forest canopy could be eventually established in the area.