Wednesday, May 18
You are at:Home»News»Sabah»5,000 fish dead in Likas lake 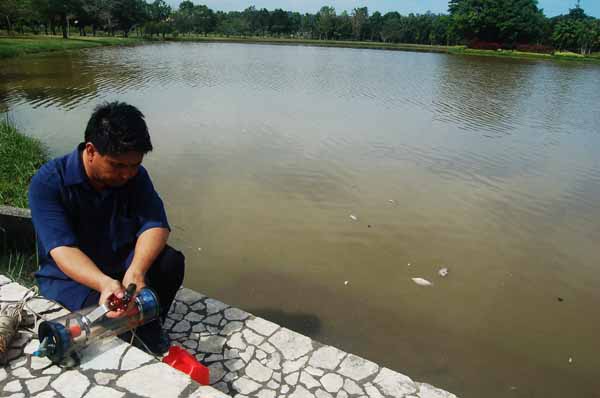 Ronnie fills a container with water sample taken from the lake to determine to cause of death for the thousands of fish. -Photo by Yong Ted Phen.

The lifeless fish were seen floating in the lake as about 10 workers scooped them up since early morning yesterday. The number of dead fish was estimated around 5,000.

Gosibi @ Robert bin Gambag, 48, a staff who has been working with Sabah Sports Board for around 28 years, said it was the second time such a large number of fish were found dead in the lake, the first being about 10 years ago. 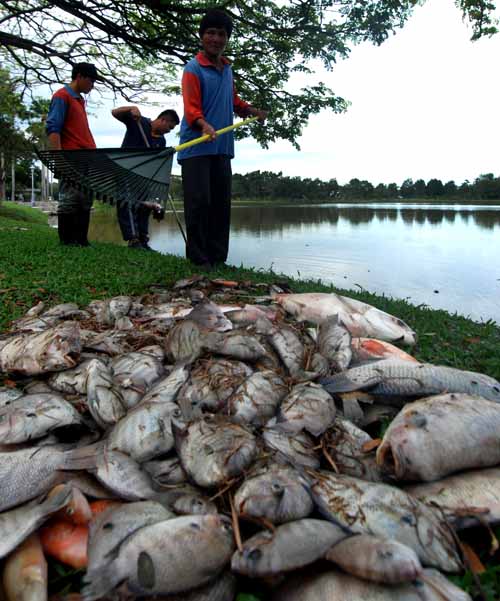 Majority of the dead fish were talapia. -Photo by James Tseu.

Gosibi believed that the fish mysteriously died over the weekend, as he himself did not see any dead fish when he walked past the lake after work last Friday.

The workers from Sabah Sports Board removed the dead fish before they were taken to Kayu Madang landfill for disposal.

Meanwhile, Ronnie Jimulis, 43, from Fisheries Department, together with two other personnel were at the scene taking water samples from the lake.

Ronnie estimated around 5,000 fish to have died for some reason that has yet to be determined.

“The samples will be sent to the Chemistry Deparment,” he said.

While the cause of the death was determined, Ronnie suspected it could be due to either chemicals or red tide.

They were informed of the incident by the Fisheries Department headquarters and proceeded to Likas Sports Complex to investigate.

Among the species of dead fish identified are talapia, koi, bahulu and even turtle.