Wednesday, July 6
You are at:Home»World»US could fly spy drones from Australian territory 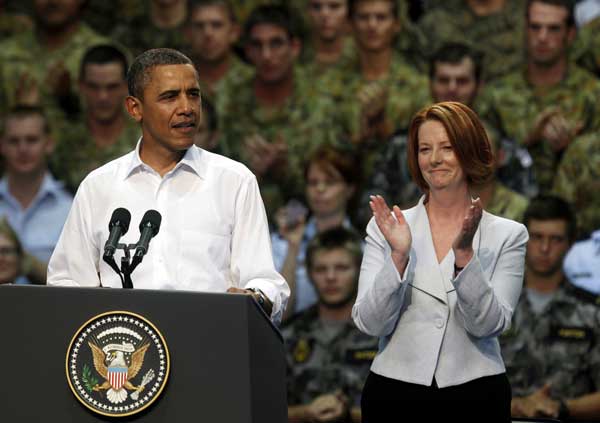 MARINES POWER: Obama (left) speaks to US Marines and Australian troops at the RAAF Base as Australian Prime Minister Julia Gillard listens, in Darwin. Australia is open to allowing US forces to use one of its remote islands in the Indian Ocean as a base for Asian spy flights, the country’s defence minister said yesterday, in a development that could anger China. — Reuters photo

SYDNEY: Australia said yesterday it may allow the United States to use its territory to operate long-range spy drones, as part of an increased US presence in the Asia-Pacific that has rankled China.

Washington and Canberra could also reportedly station US aircraft carriers and nuclear-powered attack submarines in the western Australian city of Perth, as part of a major expansion of military ties.

Under the expansion, the first US Marines out of a 2,500-strong deployment to Darwin in northern Australia – unveiled last November by President Barack Obama – are to arrive next month.

The Marines plan has irked Beijing, but reassured some Asian countries who see it as a statement that Washington intends to stand up for its allies and interests in the region amid concerns about China’s increasing assertiveness.

The reports said the Cocos, which has a population of around 600 people, would replace the present US Indian Ocean base of Diego Garcia, which America leases from Britain and which is due to be mothballed in 2016.

The Washington Post also said that Australia’s government was considering upgrading Perth’s Stirling naval base “for deployments and operations in Southeast Asia and the Indian Ocean by the US Navy”.

Australian Defence Minister Stephen Smith said the key priorities in closer US cooperation were the rotation of Marines through Darwin, greater air access and more use of the HMAS Stirling base in Perth.

Kurt Campbell, the US assistant secretary of state for East Asian and Pacific affairs, was in Australia last week to discuss the first deployment of 250 Marines next month and other defence issues, he noted.

Smith said the use of the Cocos Islands was a longer-term option for closer Australia-US engagement, and its airstrip would need to be upgraded before it could be used.

“Cocos is a possibility… it’s a long-term prospect and should be treated as such,” Smith told ABC radio.

“It’s not currently ideal because one of the first things that we would have to do… is a substantial infrastructure upgrade, particularly so far as the airfield is concerned.

“That’s one of the reasons why this is very much a long-term prospect.”

Australia’s neighbours had nothing to fear, the defence minister added. “We have been transparent about these matters.”

But he told reporters in Beijing that all countries in the Asia-Pacific region should “uphold the new security concept of equality, common development, coordination and mutual benefit, and try to uphold safety for all”.

The Cocos are seen as an ideal location to base unmanned patrol planes to keep watch on the world’s busiest shipping routes and the South China Sea, where territorial claims are seen as potentially dangerous flashpoints. — AFP