Tuesday, December 7
You are at:Home»News»Sarawak»‘Do more to promote conservation efforts’ 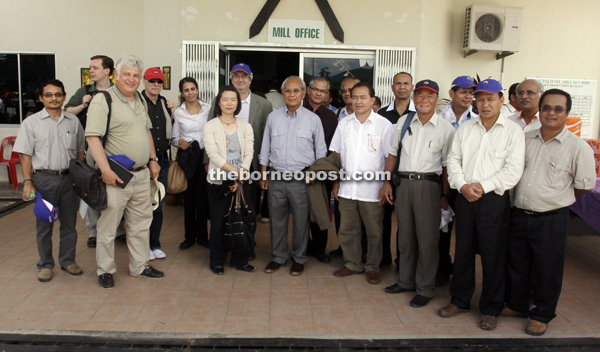 FOR THE ALBUM: Jabu (front row fifth right) poses for a group photograph with the delegation and Salcra senior officials in front of the Bau Oil Palm Mill.

BAU: The state government should do more to promote the positive things it has been doing with regards to nature conservation to correct misperceptions, especially among western countries.

Research Fellow of Adam Smith Institute, UK and Keith Boyfield Associates executive director Keith Boyfield, the spokesperson for a delegation of foreign media to the state, said among them was wildlife conservation.

He opined that at the moment Sarawak had been too modest in its campaign to tell the world about its conservation efforts, and because of that it had been subjected to criticisms particularly in Britain and Europe about the way oil palm plantations were being developed here.

He highlighted the amount of money spent, time and resources devoted to wildlife conservation that went unnoticed by countries in Western Europe due to lack of promotion.

“Most of the things we hear about are always threats to the habitats and also constant theme of the elimination of mangrove swamps and rainforests when in actual fact that doesn’t appear to be the case,” he said.

According to him, negative reports about Sarawak used to be the focus among certain newspapers, notably Russian-owned newspaper The Independent and also the bankrupt media, namely The Guardian.

“You also get some television channels that seem to focus (on this subject) because in Britain bad news sells,” he told the media during the visit by the delegation to Stenggang Oil Palm Estate here yesterday.

Boyfield, who is a regular contributor to The Wall Street Journal, Financial Times and other leading newspapers and journals including Financial Centres International, said before this there had been a lot of criticisms in Great Britain and Europe about the way oil palm plantations were being developed in Malaysia and Indonesia.

“Because of that there have been quite a lot of concern among the non-governmental organisations (NGOs) about the threats to wildlife in particular, notably things like the orang utans.

“There also have been sort of view from people in Britain that Malaysians or the people of Sarawak are cutting down all the virgin rainforests and eliminating the habitats for mammals like orang utans so that they could grow oil palm,” he noted.

He explained that the purpose of the delegation was basically to see with their own eyes whether some of the claims and accusations made in the western media corresponded to reality, saying what they discovered proved that those reports were untrue.

“This is because from what we see so far is it appeared that your palm oil plantations have actually switched from other commodities such as rubber and now you have been cultivating palm oil instead of other commodities.

“It is not so much of you cutting down lots of primary rainforest as claimed by some western media,” he commented.

Boyfield also said what struck him was that the orang utan population was concentrated only in certain areas, mainly primary rainforests which were never cultivated for oil palm plantations.

He said many people in Britain even thought that there were orang utans in Peninsular Malaysia.

They were accompanied by Deputy Chief Minister Datuk Patinggi Tan Sri Alfred Jabu and officials from Salcra and other government agencies.