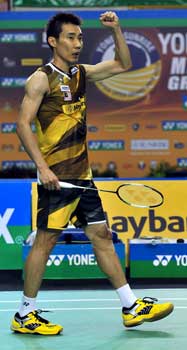 In the first set, the world number one who has yet to fully recover from  a shoulder injury, played a cautious game which gave room to Sony to take the set in 21-17.

However, in the second and third sets, Chong Wei turned more aggresive and his rhythm threw Sony off balance and cave in to the Malaysian in 50 minutes.

The winners prizes were given away by Tunku Temenggong Johor Tunku Idris Sultan Ibrahim.

This year’s edition of the tournament also saw Malaysians dominating it, winning three other categories as well.

However, in the women’s doubles final, Chin Eei Hui and Wong Pei Tty had a tougher time against Singapore’s Sari Shinta Mulia and Yao Lei before prevailing in 21-18, 21-18 in 45 minutes.

In the mixed doubles, although Chan Peng Soon had a wrist problem, he managed to partner Goh Liu Ying to victory. The pair beat Indonesia’s  Indonesia Irfan Fadhilah/Weni Anggraini in straight sets of 21-12, 21-14.

In the only final without Malaysians – the women’s singles, Thailand’s Busanan Ongbumrungpan clinched the title after defeating Takashi Sayaka of Japan 21-17, 22-20. — Bernama