Sunday, May 22
You are at:Home»Features»Another cycling wave in Kuching

A highlight of past National Day celebrations was the Kuching-Serian-Kuching race. It was glorious seeing the peloton flying along Rock Road with the police outriders escorting them. This race has been discountinued for several years. 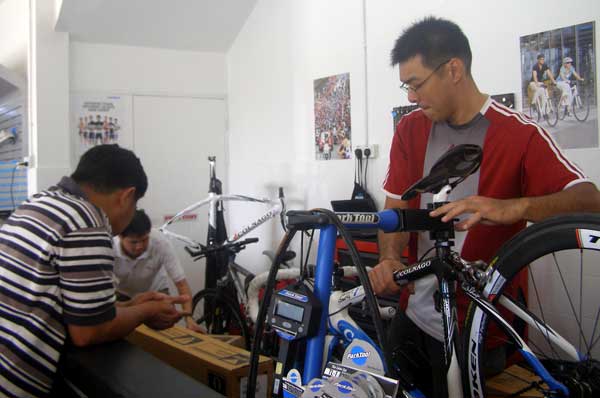 HANDLE WITH CARE: HC Chin (right) gingerly clamps a bicycle onto a workstand for some adjustments.

THERE has been lot of chatter, lately, at Kuching’s water-coolers and in kopitiam with words like Shimano, Campagnolo, SRAM, recovery ride and carbonfibre being bandied about.

To the average person, all these terms are meaningless.They only mean something to those who were at the Borneo Convention Centre Kuching on March 24 and 25 where the Sarawak Cyclefest was held.

Shimano, Campagnolo and SRAM are the top component makers while carbonfibre is the choice material for high-end bicycles.

There has been a proliferation of lycra on Kuching roads lately and it’s a Malaysian trend which has seen a growth in cycling.

“I estimate there’s about 20 per cent increase in sales,” he said, comparing the first quarter of 2012 with the same 2011 period.

“Mountain bikes still sell the most but road bikes are more popular now,” he added, noting that being health-conscious is a contributing factor.

Performance Bicycle’s manager HC Chin observed there had been “quite a lot of white-collar workers taking up cycling lately.”

Joyo Pro-Bike’s owner Ahmad Joyo pointed out that cycling was less stressful on the body.

“You can cycle for several hours without getting too tired as you can stop, catch your breath and resume — unlike running where you are tired after an hour’s run,” he said, adding that cycling was less injury-prone.

Jessy Jee, at the encouragement of her husband, Jee Tze Liong, who rides with the Kuching NiteRiders group, took up cycling in August last year.

“I also wanted to try a more exciting and interesting sport, plus it’s also good for health,” said Jee who works with her husband in their home renovation business.

“When I heard there were ladies in the group, I had the confidence to join them as I was afraid I might not be able to keep up with the pack,” she explained.

“The other cyclists are very helpful and friendly — so it helps keep me going.”

Now she feels she “can loudly shout out that cycling is wonderful and fun!”

“I did the Tasik Biru trail in Bau once with my husband as he wanted me to try the difference between road and off-road riding.

He said it would be fun,” laughed Jee, recalling that “the rocky downhill section was a bit scary.”

It’s not just the classic racing bike and the mountain bike that are appearing on Malaysian roads.

Another popular bike is the fixed-geared bikes or fixies which have a single gear with no coasting ability — which means your legs move whenever the wheels roll.

A true fixie has no brakes — just like its velodrome brethren. A skilled rider brakes using the legs, a la Fred Flinstone, by stopping the pedals from turning which sends the bike into a skidding stop.

Ahmad Joyo is bemused by the popularity fixes.

“Maybe it’s because they are simple and inexpensive. They are trendy as they are so popular in West Malaysia,” said the retired commando and once top Malaysian triathlete.

There are now magazines like Cycling Malaysia which give the latest information on bikes, components and competitions. There is even a Malaysian website, bicyclebuysell.com, dedicated to the trading of cycling goods. In tandem with this growth, there are organised rides almost every weekend in Malaysia.