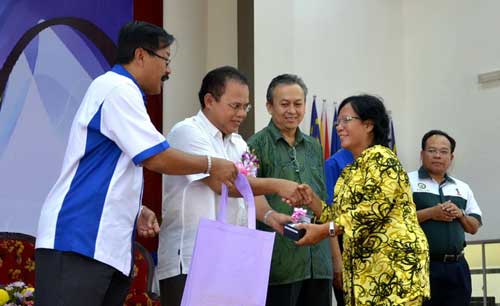 FOR A GOOD EFFORT: Entulu (second left) presents an award to one of the outstanding participants while others look on.

BINTULU: The success of our national education system is measured by the literacy rate of our people.

The higher it is in the rural areas, the better it will be for the Dayak community as it helps to shape the development of human capital that contribute to economic, social and political development, says Deputy Minister of Rural and Regional Development Datuk Joseph Entulu Belaun.

“In the year 2015, Malaysia is expected to have zero illiteracy. The increase of literacy among adults has a positive impact on children’s growth and development.

“Parents who encourage their children to read from childhood are a good influence on the attitude of children towards literacy,” he said when officiating at the closing of the state-level Rural Literacy Day 2012 at IKM Bintulu here yesterday.

Entulu also stressed that acquiring knowledge was very important in building a knowledgeable and civilised society.

“Consequently, a holistic approach is necessary to enable us to react more quickly to a dynamic and competitive global environment. Emphasis should be given to the change in attitude, personal qualities and awareness to develop and achieve goals,” he said.

According to him, the level of education determines the economic growth of a country and its productivity.

“A study in 50 countries shows that the increase in educational level could increase a country’s Gross Domestic Product by 0.37 per cent.

“The Economic Planning Unit’s reports on the New Economic Model stated that most of the workforce in this country consists of low-skilled group, it could be a barrier to the country’s target to be a developed nation by 2020.

“It’s clear — the growth of our economy depends on the ability to maintain productivity and high competitiveness. Competitiveness and productivity depend on the availability of educated workers who are knowledgeable, skilled and highly motivated,” he said.

As such, he called on the Community Development Department (Kemas) to run its technical and vocational education programmes like sewing and handicraft making aggressively in the rural areas to get more people involved.

He revealed that his ministry through Kemas provided pre-school education to children aged four to five years old in kindergartens and day care centres, now upgraded to ‘Taska Permata Kemas’, to those aged two to four years old.

“This shows that the government always gives equal emphasises to the education of adults and children,” he said.

The Selangau MP also reminded the people that the era of globalisation had brought drastic changes to lifestyles and social system throughout the world.

He thus advised them to be constantly up-to-date with knowledge through lifelong learning through Information and Communication Technology.