Monday, May 23
You are at:Home»News»Sarawak»Hevance band, undisputed champion in AJARR 2012 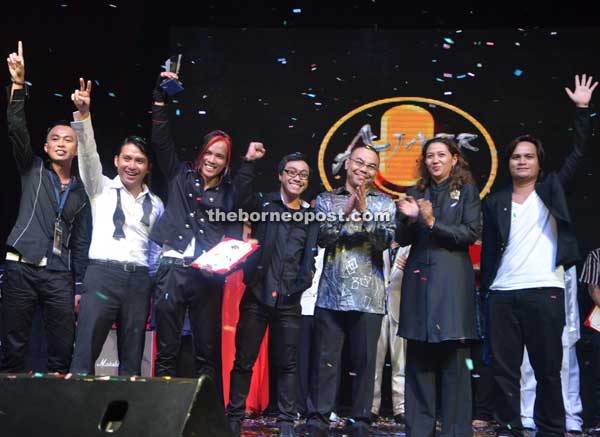 REVOLUTIONISING MUSIC: Superstar Hevance band with Hanifah (second right) and Iskandar (third right) after being crowned as champion in AJARR 2011.

An energetic performance by Hevance portrayed their ultramodern music as well as a revolution in their musical concept, prompting judges to put them on top of the list.

The group’s victory in modern freestyle or rock had already been anticipated in the early stage of the singing contest by Iban artistes’ observers and music industry enthusiasts.

This was because the concept of the group’s music matched the theme of AJARR, ‘Revolusi Muzik Kemaya Hari’ (Revolution of Contemporary Music) in comparision with other finalists.

Hevance had also secured the Best Song award after Masterpiece band, who was the champion last year.

Being the winner, the band walked home with RM5,000 cash and a trophy.

Melissa Francis won the Popular Song category after more than 21,000 fans voted on her song, ‘Mutus Ati’, via SMSes.

Excitement surged in the hall when deejay Freddy and Ijau called out Melissa’s name as the winner for the category. She received RM3,000 cash and a trophy.

Second placing went to Lucy M, with her song, ‘Buya Bepangan’. She received RM2,000 and a trophy.

Rickie Andrewson’s song, ‘Engkerecam Cuka’ was placed third, and he walked home with RM1,500 and a trophy.

Without its prime vocalist, Macmillan Jua Lungan this time, a question mark rose among the band’s fans, leading to the speculation that the band would break up and a new name be sought. Ethnic received RM2,000 and a trophy.

Special recognition was accorded to Alon Lupeng and Jackson Dana for their contributions to the Iban music industry.

Jackson Dana is an experienced composer in the industry.

Cats FM hosted the singing contest while The Borneo Post and Utusan Borneo were the official media.

A total of 12 popular Iban songs vied for title during the contest.