Sunday, May 22
You are at:Home»Business»SapuraKencana becomes nation’s largest O&G player 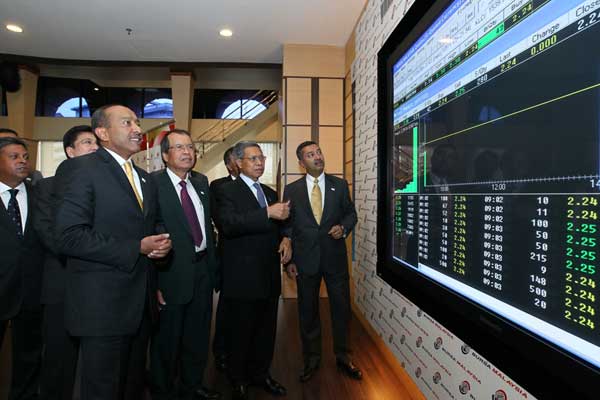 GLOBALLY KNOWN: (from left) Shahril, Hamzah, Mustapa and Mokhzani checking out the stock price movement at its listing ceremony on the Main Market of Bursa Malaysia with other members of the board of directors of SapuraKencana Petroleum Bhd looking on.

According to the company, the merger was initiated in July last year. The merger created Malaysia’s largest O&G service provider, which also ranked among the top five O&G service companies in the world by asset value.

SapuraKencana’s chairman Datuk Hamzah Bakar said, “The O&G industry is now looking for turnkey service providers that can manage complex tasks end to end. Our new, enhanced position backed by a full suite of services and a solid international track record places us in good stead to expand our global footprint while tapping opportunities locally.”

“This does not mean that we merely aim towards greater profits at the expense of everything else, but to continue to strive to become an international brand. Achieving this would mean creating a positive impression globally not only for SapuraKencana but Malaysia and Malaysians as a whole,” he added in an email response.

According to Hamzah, Miti and the government had played an integral role in SapuraKencana’s expansion into the global landscape. “The story of SapuraKencana started more than 10 years ago as separate entities. Today is a milestone in history, emerging as a single new company with a vision to become a global force in the O&G industry.”

During the listing, SapuraKencana also announced its senior management team who would play a key role in driving its growth.

A total of 5,004,366,196 SapuraKencana shares were listed yesterday at an issue price of RM2 per share. This placed SapuraKencana in the Top 30 of the largest Malaysian companies by market capitalisation.

The listing followed the successful distribution of SapuraKencana shares and cash payments to entitled shareholders on May 15, 2012.