Tuesday, September 28
You are at:Home»World»Chaos as plane crash hits one of Africa’s largest cities 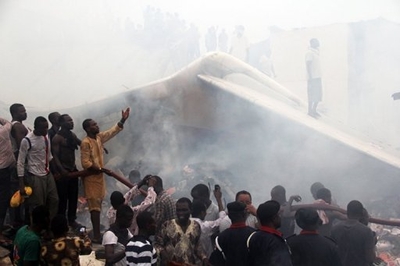 People stand at the scene of the crash of a Dana Airline plane that plunged onto a plot containing a church, a two-storey residential building and a printing shop in Lagos. --AFP photo

LAGOS: Chaos broke out in the densely-populated Lagos neighbourhood where a passenger jet crashed Sunday, as rescue workers faced heavy crowds and aggressive soldiers while trying to access smoldering wreckage.

All 153 people on board the Dana Air flight were presumed dead and more were believed to have been killed on the ground after the plane plowed into the impoverished neighbourhood near the airport in the city of some 15 million.

Thousands of onlookers had partially blocked access to the crash site, prompting soldiers to try to clear the area out. They used rubber whips, their fists and even threw a wood plank at those crowded around.

The strong-arm tactics likely did more harm than good. Looking to evade the troops’ aggression, people took off in several directions, trampling their neighbours as they tried to avoid being crushed themselves.

Some locals snaked a fire hose hoisted on their shoulders from a truck parked on the road towards the impact area.

But this effort was also interrupted by the security forces, whose aggression eventually broke up the human chain.

Some reacted by throwing stones at the troops, creating a crossfire of hailing rocks over the narrow street adjacent to the site.

The area also plunged into all-out pandemonium when a helicopter tried to land amid the crowd, kicking up clouds of ash and light debris that again scattered people in various directions.

After the crash, it appeared only a handful of rescue vehicles had managed to fight through the chaos to reach the site.

People in the neighbourhood near the airport are used to seeing planes flying low overhead, but they said it was immediately clear that the Dana Air Boeing MD83 flight was imperiled.

“The pilot was struggling to control it,” said Yusuf Babatunde, 26, who mimicked wings recklessly swaying from side to side when asked to describe what the plane looked like as it went down.

The impact caused an immediate fire and sent people running, but they quickly returned, and within hours of the crash the roofs and balconies of the surrounding ramshackle buildings were flooded with those surveying the damage.

Some, according to one 50-year-old resident, sought to gain financially from the disaster.

“The looting started right away,” said Tunji Malomo, who told AFP he locked up his nearby bar as soon as he heard news of the crash.

“This is busy, busy area,” said Martin Ajebayo, 38, a local who said he witnessed the plane go down.

“People are living there,” he added, while gesturing to the area where the plane crashed, which locals said included a printing business, a church and a two or three story residential building.

Rescue workers said several people had been pulled out alive, but few believed there would be many survivors following a high impact crash in a contained, urban area.