Saturday, April 17
You are at:Home» 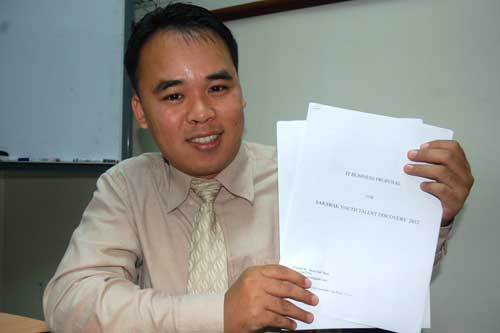 CREATING AWARENESS: The basis of Musa’s IT business proposal is to create public awareness of the availability of free-to-use open source software for their computers instead of relying on pirated versions of existing popular software.

The 30-year-old from Kampung Sibakar, Padawan, submitted his entry only after thinking about it for two days, and to back his case, an impressive IT business proposal was also attached with his application form.

Musa, who is proudly the first computer engineer in his 40-household kampung, hopes he will be one of the lucky beneficiaries of the RM1 million talent discovery project.

At the age of 17, Musa wanted to be a member of Tunku Abdul Razak College’s computer club so that he could be with his pals and use the computer facilities there.

“Back then, I always wanted to use the computers in school. To do that, I had to be a member of the computer club but I simply could not afford the yearly membership fee,” he recalled.

Musa is open-minded enough to share that his parents have long been shifting padi cultivators who sometimes could not make ends meet. And paying the RM30 annual computer club fee for him was beyond their means.

Even during his university days in Labuan, Sabah, Musa had to work part time as a construction site labourer during semester breaks to buy air tickets home.

Despite the obstacles, the father of three daughters kept up his interest by listening to the learning experiences his best pals would relate to him after their computer lessons.

“I learned a thing or two about computers from my friends and the best part was when they were playing computer games,” said Musa, who now works as a system software engineer-cum-representative for a private company that services computer systems in government-run clinics in Kuching Division.

Having travelled a lot to various clinics as part of his daily duties, Musa, the second youngest in a family of four siblings, has always enjoyed the challenges of working with computer servers and mainframes which occasionally give way to wear and tear.

And because of this, he has to be on constant standby to help clients trouble-shoot technical glitches and software malfunctions of their commuter systems.

Due to the nature of his job, the University Malaysia Sabah (UMS) computer graduate has to stay alone in Kuching, leaving behind his 26-year-old wife, Dora Ralei and their three daughters — Elijah, 4, Ezebiel, 1, and 5-month-old Ezther — back in Serian.

From his experience working with computer peripherals and software, Musa discovered that many people were still ignorant of the availability and convenience of open-source software that could actually be downloaded and used without any licensing fees or charges.

“There are ways to get free open-source computer software because it’s much better than using pirated ones which may cause problems in the future,” he said on the need for the public to switch to downloading open source software for their computers.

People rely too much on pirated software which is prone to failure and malfunction because illegal users don’t get the technical support, on-going bug fixes or improvements to the system that authorised users receive.

Moreover, if caught copying more than the licensing permits, they can be subjected to prosecution.

In that respect, the basis of his business proposal is to provide promotional, educational and the marketing of services related to open source software, a plan that could propagate its wide-scale usage by the public.

Musa is modest about his immediate plans should he get the support or funding from the SYTD project.

“I will have to set up my own company first before anything else because it’s important, and only after that will I look for partners or investors willing to join me in this business venture,” he said.

“I also plan set up classes for people on using the open source software because it’s one of the ways to promote public use of the software.”

But from the look in his eyes, the much-needed support and funding will bring Musa’s lifetime dreams a little bit closer to reality.

All this while he has been carrying the burden of high expectations from his family and kampung.

“I have always had high expectations to live up to but I have no qualms about it,” Musa said, hoping his business proposal would succeed in impressing the SYTD judges.

The scope of talents for the SYTD project covers a wide range of specialties, including the arts, sciences, horticulture, agriculture, sports, engineering, architecture, information technology, hospitality and mass communication, among many others.

The closing date for registration is Aug 15, 2012. Application forms can be obtained from KTS Holdings Sdn Bhd.

For more enquiries, contact Karen Teng or April Lau at 082-345033. Alternatively, application forms can be downloaded from www.seehua.com or www.theborneopost.com