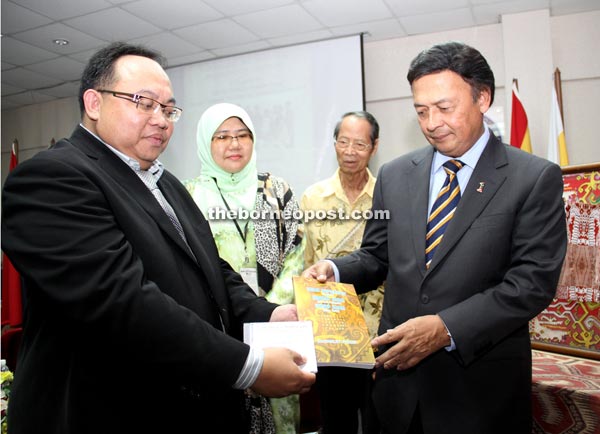 THE IBAN ALPHABET: Bromeley (left) showing Mawan the book and soft copy while Rosita (second left) and Langgu look on.

On the surface, it comes across as a simple-looking book but its contents hold immense significance to the Iban community.

Bromeley said the Iban alphabet was not an ancient system of writing as the inventor, the late Dunging Gungu, lived well into the mid-1980s.

The alphabet system manifested characteristics of modern writing, he said.

“Generally, the Dunging alphabet is made up of syllabic and alphabetic writings. The former consists of syllabaries, which represents syllables in the Iban language, while the latter are true alphabets comprising consonants and vowels.”

Dunging’s Iban alphabet remains the only known Iban system of writing in existence, and is recognised and recorded in the Encyclopaedia of Iban Studies 2011 published by the Tun Jugah Foundation.

Dunging, who committed almost his entire working life to this invention, deserved to be known as an Iban genius for his cognitive invention represented a magnificent intellectual technology in the Iban society, said Bromeley, a grandson of Dunging.

Dunging’s own genealogy could be traced back to one great Iban forefather by the name of Renggi.

He was the 20th generation of direct descendant of Renggi, and that makes Bromeley, a grandnephew of Dunging, the 22nd generation.

The Iban alphabet has its roots in an Iban legend, the university professor pointed out.

“The Iban do have a written script, but the script was lost in a massive flood that once hit the ancient world. Renggi attached the script to the end part of his loin cloth (cawat) while making an escape by scaling a ketapang tree.”

Unfortunately, Renggi was not fast enough to escape the rising water and the script which he had attached to the end part of the loin cloth got soaked in the water.

“The script was soaked wet and the writing vanished by the water.”

Anguished and sad, Renggi took the skin of the wood that contained the script, munched and swallowed it.

“So, the legend has it that Renggi swallowed the script, and the generations of Iban that followed became adept at memorising their traditions like as though they were written in books.

The Iban, then descendants of Renggi, were known for their ability to remember their oral traditions purely from memory, and transfer it through memorisation from one generation to another.”

It was that legend that triggered Dunging to believe that the Iban once had a written script.

Metaphorically, Dunging held the belief that if it was true that the Iban had a written script which was lost in the great flood, then it is possible for the script to be found because anything that is lost could still be found if one looked hard enough for it.

Dunging took up the challenge of finding the lost Iban script and began his painstaking effort at inventing the alphabet.

He realised that as a language in itself without an alphabet, the Iban language would not be strong enough to withstand the test of time.

“For a language to have a lasting impact, it needs to have its own writing system not only for documentation purposes but also as a linguistic identity of a society,” said Bromely, quoting Dunging in Iban.

The invention of the alphabet was a feat that Dunging accomplished within a span of 15 years – from 1947 to 1962.

He invented 77 characters symbolising sounds found in the Iban language which he later revised to 59 characters.

Each character has its meaning and significance but unfortunately, the meanings were left undocumented as Dunging did not have any proper documentations.

Bromeley said: “The lost script had been found and developed for modern inscriptional purposes. It will never be lost again because the great great grandson of Renggi (which is Bromeley) has published it in a book called ‘The Iban Alphabet’.”

Previous ArticleBreak-in not cause of killing
Next Article Aquino signs laws on anti-money laundering, anti-terrorist financing