Sunday, November 29
You are at:Home»Sports»Top riders in Lundu race 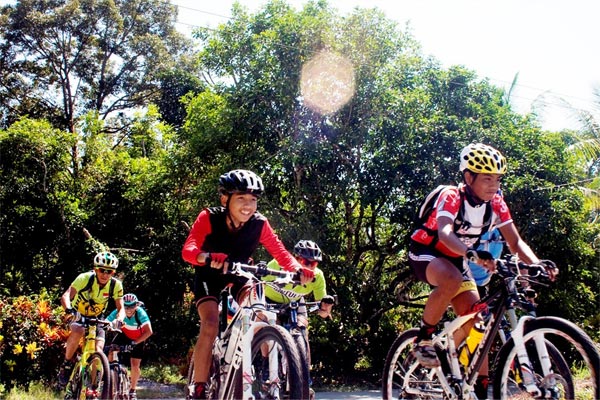 Over 200 cyclists for inaugural Lundu MTB XC Challenge this weekend

KUCHING: Over 200 riders including national sprint king, Anuar Manan are competing in the inaugural Lundu Mountain Bike Cross Country Challenge to be held in Lundu over the weekend.

With total cash prize money of RM18,900 up for grabs in the two-day event, top riders from throughout Sarawak, Sabah, Brunei, Indonesia and Singapore will be battling it out in the race organised by Lundu District Office in conjunction with its 135-years anniversary as an administrative district.

Tipped to become this year’s most exciting race to be held in Kuching, the 65km cross-country event will test the riders’ stamina and endurance when they rough it out on the off-road terrain of Lundu’s Gunung Gading foothills.

Among the teams to watch include SBS Giant Racing team whose challenge is being led by Anuar Manan – one of the national cyclists who is dubbed as the Malaysian sprint king and was shortlisted for this year’s Asian Games and London Olympics.

For the record, Anuar previously represented China-based Champion System professional cycling team – the world’s first Asian-based professional continental team which competed in major UCI tours in Asia, professional tours in Europe and in the US.

“The response for the event is overwhelming and we are happy that many riders from outside the state are taking part in the race which offers one of the most lucrative prize money to the winners,” Lundu district officer Azmi Bujang told The Borneo Post recently.

“We hope this prestigious event will position Lundu as one of the premier locations for extreme sports like mountain biking in the state as well as country,” he said on the tomorrow’s event which has attracted entries from neighbouring Brunei, Indonesia, Singapore, Sabah and West Malaysia.

He however expect many last minute entries particularly from local mountain bike enthusiasts to join in the fun because the closing date for entry is set on the race day itself to enable those interested to compete to do so at least one hour before the start.

Sanctioned by Sarawak Cycling Association (SCA), the registration and flag-off point will be at Lundu Mini Stadium with a rolling start on tarmac road to be a 13 km ride, passing through the scenic Lundu town before proceeding to Kampung bajo where the off-road challenge begins.

The event manager, Abdul Hakeem Hossen expressed confidence the majority of the riders will thoroughly enjoy the race with the real test begins from the dry and beaten hilly tracks off Kampung Bajo and heading to Kampung Belungei to the challenging foot hills of Gunung Gading and its surrounding forest reserve.

“It will not be an easy ride for us because the actual route will only be made known before the race starts and the riders will be tested for their stamina as well as endurance…it (tracks) will also test their bikes as well” said Hakeem who together with a few local riders suffered punctured tires while trying out gruelling sections of the race route.

According to him, the ride is not a technical one but they (riders) will have to watch out the best opportunity to break away from the big group particularly because the narrow tracks welcoming riders upon setting off Kampung Bajo will then become a slow down point for the group as riders frantically try to enter the area in a possible frenzy.

Another challenging section of the race route is possibly the Kampung Keranji Ulu, Biawak logging trail and Kampung Pasir where the current dry spell had made the sandy track unbearably hot plus the blazing sun will possibly melt those who come unprepared for such test.

“The rough conditions and current hot spell will test both the riders and their bikes which make this cross country challenge something good to remember” said Hakeem who disclosing many Sukma and other leading cyclists from others states are unable to compete because the Lundu race clashed with the ongoing Kelantan grand tour.

Meanwhile, those who are interested to join the road race at Lundu town on June 23 are invited to come to register early on that day before the Criterium Race starts and the 2.5 km per lap route will be held within the town itself.

Entry fee for the Open and Masters Categories is only RM50 while the children category is free of charge.