Wednesday, October 20
You are at:Home»World»Student dies giving at sperm bank

There are loads of myths about masturbation—hairy palms, going blind… Here’s a new one: you can wank yourself to death.

In China, a 35-year-old medical student died while donating his semen for the fifth time in two months. Nurses at the Hubei Provincial Human Sperm Bank found Zheng Gang unconscious in the donor room and he died on the way to the hospital.

No one knows what happened in the 45 minutes Zheng was in the room alone, and the cause of his death remains a mystery because his body was cremated the day after he died without an autopsy.

Those who knew Zheng from the Huazhong University Of Science And Technology, which owned the sperm bank, said he was healthier than any of them. “I hadn’t seen him sick in three years,” said one of his lecturers, Professor Lin.

Zheng was an attending doctor at the Heart And Brain Surgery Department of Laohekou Number 1 Hospital, but he resigned in 2008 to pursue his masters degree and PhD. He visited his former colleagues from time to time, and records show they gave him a complete medical check 10 days before he died.

The report said Zheng, standing at 178cm and weighing in at 80kg, was in excellent health. “Even when he was working here, we had not seen him sick,” said one medical attendant. 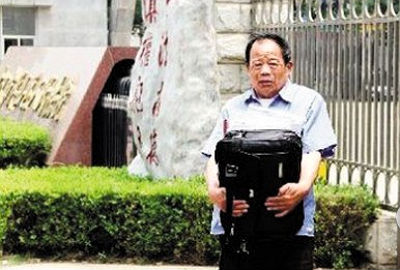 Zheng Jinlong carrying the evidence he collected himself.

Zheng Jinlong, Zheng Gang’s father, received 88,000 yuan (RM44,000) from his son’s university as compensation, and they waived the 20,000 yuan (RM10,000) tuition fee for his daughter-in-law who’s also a student there. Jinlong, however, has filed a 4mil yuan (RM2mil) lawsuit against the institution.

“I asked for a post mortem on my son a few times, but my requests were rejected. Something must have gone wrong. My son was so healthy,” said Jinlong, reading the indictment at the hearing of the case last week. He added that he was unable to afford a lawyer and had collected the evidence himself.

According to the Hubei Provincial Human Sperm Bank website, a qualified donor must donate his semen from eight to 15 times in six months to earn between 3,800 and 4,800 yuan (RM1,900 to RM2,400). An additional 200 yuan (RM100) fee is paid out if the donor completes his assignment in three months. – Source by dailychilli