Sunday, September 26
You are at:Home»News»Sarawak»Sibu set to become a city of festivals 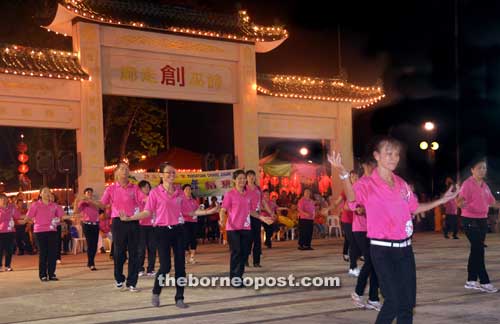 FOLK DANCING: The team from the Sibu Chian Chuang Association of the Hokkien clan in a group dance during the festival.

SIBU: Sibu is set to become a city of festivals as various cultural and festive activities are being held to enhance the cultural values of the townsfolk.

He said the festival was so successful that since its opening two Fridays ago, a crowd of 120,000 people had been estimated to have thronged Sibu Town Square by last Friday.

He estimated another crowd of 20,000 last Saturday night as he spoke during the comic dialogue event.

“The people love the festival, and from their response and participation in co-hosting it with us, Borneo Cultural Festival has been very successful.”

To spice up the cultural reputation of Sibu, he said the Tourism Ministry had decided to host another festival – the International Folk Dance Festival – beginning next year.

“Kuching has the World Rainforest Music Festival, Miri has its Jazz Festival, and now, folk dancing will be hosted annually in Sibu to draw in tourists.”

Tiong, who is also Lanang MP, said even before the proposal to host the grand world folk dance event next year, his council was already looking into another international dance event to be held this year dubbed ‘The International Dance Festival’ and the three-day event would kick off on Aug 22 at Sibu Civic Centre.

He said participating troupes would come from throughout the country and also from Taiwan, Singapore and Indonesia.

“That’s not all. My municipal council expects to make Christmas celebration this year grander too.”

He said his council had written to 23 secondary schools, requesting them to decorate a giant Christmas tree each at the town square.

“If all these schools respond, we shall have 23 giant Christmas trees to light up our town square during the festival.”

Tiong called on the townsfolk to share the council’s dream to help Sibu live up to its graceful quality.

The Chinese cultural comic dialogue is similar to a sketch or comedy involving two persons talking humourously on a subject.

The art is a cultural performance to enlighten the crowd in a stage show.