Sunday, February 28
You are at:Home»News»Sarawak»With royalty and rock, Britain opens its Olympics 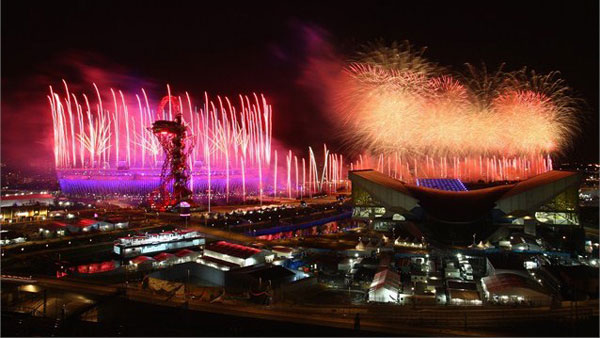 LONDON: The queen and James Bond gave the London Olympics a royal entrance like no other Friday in an opening ceremony that rolled to the rock of the Beatles, the Stones and The Who, Associated Press reported.

And the creative genius of Danny Boyle spliced it all together.

The highlight of the Oscar-winning director’s $42 million show was pure movie magic, using trickery to make it seem that Britain’s beloved 86-year-old Queen Elizabeth II had parachuted into the stadium with the nation’s most famous spy.

A short film showed 007 driving up to Buckingham Palace in a black London cab and, pursued by her majesty’s royal dogs – Monty, Willow and Holly, playing themselves – meeting the queen, who played herself.

They were shown flying in a helicopter over London landmarks and a waving statue of Winston Churchill – the queen in a salmon-colored gown, Bond dashing as ever in a black tuxedo – to the stadium and then leaping out into the inky night.

At the same moment, real skydivers appeared in the skies over the stadium throbbing to the James Bond soundtrack. And moments after that, the monarch appeared in person, accompanied by her husband Prince Philip.

Organizers said it was thought to be the first time the monarch has acted on film.

“The queen made herself more accessible than ever before,” Boyle said. 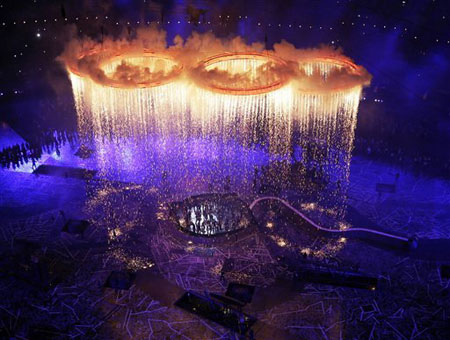 OLYMPIC RINGS assembled above the stadium. Photo by Associated Press

In the stadium, Elizabeth stood solemnly while a children’s choir serenaded her with “God Save the Queen,” and members of the Royal Navy, Army and Royal Air Force raised the Union Jack.

Much of the opening ceremony was an encyclopedic review of British music history, from a 1918 Broadway standard adopted by the West Ham soccer team to the Rolling Stones’ “(I Can’t Get No) Satisfaction” to “Bohemian Rhapsody,” by still another Queen.

The evening started with fighter jets streaming red, white and blue smoke and roaring over the stadium, packed with a buzzing crowd of 60,000 people, at 8:12 p.m. – or 20:12 in the 24-hour time observed by Britons.

An explosion of fireworks against the London skyline and Paul McCartney leading a singalong were to wrap up the three-hour opening ceremony masterminded by one of Britain’s most successful filmmakers.

Boyle, the director of “Slumdog Millionaire” and “Trainspotting,” had a ball with his favored medium, mixing filmed passages with live action in the stadium to hypnotic effect, with 15,000 volunteers taking part in the show.

Actor Rowan Atkinson as “Mr. Bean” provided laughs, shown dreaming that he was appearing in “Chariots of Fire,” the inspiring story of a Scotsman and an Englishman at the 1924 Paris Games.

There was a high-speed flyover of the Thames, the river that winds like a vein through London and was the gateway for the city’s rise over the centuries as a great global hub of trade and industry.

Headlong rushes of movie images took spectators on wondrous, heart-racing voyages through everything British: a cricket match, the London Tube and the roaring, abundant seas that buffet and protect this island nation.

Boyle turned the stadium into a throbbing juke box, with a nonstop rock and pop homage to cool Britannia that ensured the show never caught its breath.

The throbbing soundtrack included the Sex Pistols’ “Pretty Vacant” and a snippet of its version of “God Save the Queen” – an anti-establishment punk anthem once banned by the BBC. There were The Who’s “My Generation” and other tracks too numerous to mention, but not to dance to.

THE WIDE VIEW OF THE STADIUM. –Photo taken from xinhuanet.com

Opening the ceremony, children popped balloons with each number from 10 to 1, leading a countdown that climaxed with Bradley Wiggins, the newly crowned Tour de France champion.

Wearing his race-winner’s yellow jersey, Wiggins rang a 23-ton Olympic Bell from the same London foundry that made Big Ben and Philadelphia’s Liberty Bell. Its thunderous chime was a nod to the British tradition of pealing bells to celebrate the end of war and the crowning of kings and queens, and now for the opening of a 17-day festival of sports.

The show then shifted to a portrayal of idyllic rural Britain – a place of meadows, farms, sport on village greens, picnics and Winnie-the-Pooh, A.A. Milne’s bear who has delighted generations of British children tucked warmly in bed.

But the British ideal – to quote poet William Blake, of “England’s green and pleasant land” – then took a darker, grittier turn.

The set was literally torn asunder, the hedgerows and farm fences carried away, as Boyle shifted to the industrial transformation that revolutionized Britain in the 18th and 19th centuries, the foundation for an empire that reshaped world history. Belching chimneys rose where only moments earlier sheep had trod. 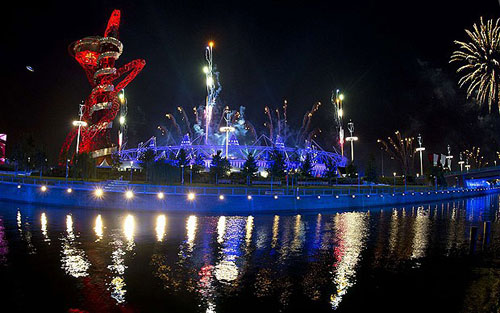 SHOW TIME: Rehearsals have taken place over the last week to ensure everything is ready for the Opening Ceremony Photo: AFP

The Industrial Revolution also produced terrifying weapons, and Boyle built a moment of hush into his show to honor those killed in war.

“This is not specific to a country. This is across all countries, and the fallen from all countries are celebrated and remembered,” he explained to reporters ahead of the ceremony.

“Because, obviously, one of the penalties of this incredible force of change that happened in a hundred years was the industrialization of war, and the fallen,” he said. “You know, millions fell.”

Olympic organizers separately rejected calls for a moment of silence for 11 Israeli athletes and coaches slain by Palestinian gunmen at the 1972 Munich Olympics.

Two of the Israelis’ widows appealed to audience members to stand in silence when International Olympic Committee chief Jacques Rogge rose to speak later at Friday’s ceremony. The Israeli culture and sport minister planned to do just that.

The parade of nations featured most of the roughly 10,500 athletes – some planned to stay away to save their strength for competition – marching behind the flags of the 204 nations taking part.

Greece had the lead, as the spiritual home of the games, and Team Great Britain was last, as host. Prince William and his wife, Kate, joined in the thunderous applause that greeted the British team, which marched to the David Bowie track “Heroes.” A helicopter showered the athletes and stadium with 7 billion tiny pieces of paper – one for each person on Earth.

Both Bahrain and Brunei featured female flagbearers in what has been called the Olympics’ Year of the Woman. For the first time at the games, each national delegation includes women, and a record 45 percent of the athletes are women. Three Saudi women marching behind the men in their delegation flashed victory signs with their fingers.

“This is a major boost for gender equality,” said the International Olympic Committee president, Jacques Rogge. These are his last games as head of the IOC. He steps down in 2013 after completing the maximum two terms.

Rogge honored the “great, sports-loving country” of Britain as “the birthplace of modern sport,” and he appealed to the thousands of athletes assembled before him for fair play.

“Character counts far more than medals. Reject doping. Respect your opponents. Remember that you are all role models. If you do that, you will inspire a generation,” Rogge said.

The queen declared the games open. Last month, the nation put on a festive Diamond Jubilee – a small test run for the games – to mark her 60 years on the throne, a reign that began shortly after London’s last Olympics, in 1948.

Former world heavyweight champion and 1960 Rome Olympic gold medalist Muhammad Ali was cheered when he appeared briefly with his wife, Lonnie, before the Olympic flag was unfurled. 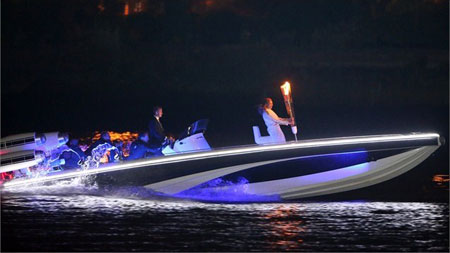 The boat is being piloted by David Beckham who played an important role in bringing the Games to London and has been a big supporter ever since. Carrying the Torch on the boat is Jade Bailey, a young footballer tipped to become one of the sporting stars of the future. It set off from Tower Bridge to make its way to the Olympic Stadium.– Photo taken from london2012.com

The Olympic cauldron was to be lit with a flame that was kindled May 10, at the birthplace of the ancient Olympics in Greece, from a reflection of the sun’s rays off a mirror.

Since then, 8,000 torchbearers, mostly unheralded Britons, have carried the flame on a 70-day, 8,000-mile journey from toe to tip of the British Isles, whipping up enthusiasm for a $14 billion Olympics taking place during a severe recession.

The identity of the last torchbearer, the one to light the cauldron, was kept secret – remarkable given the intense scrutiny at what have been called the first social media Olympics.

Speculation focused on Roger Bannister, the first man to run a four-minute mile, in 1954, and on rower Steve Redgrave, among others.

Their appearance had a serious message, too – the importance of literacy.

“If you can read and write, you’re free, or you can fight for your freedom,” Boyle said. 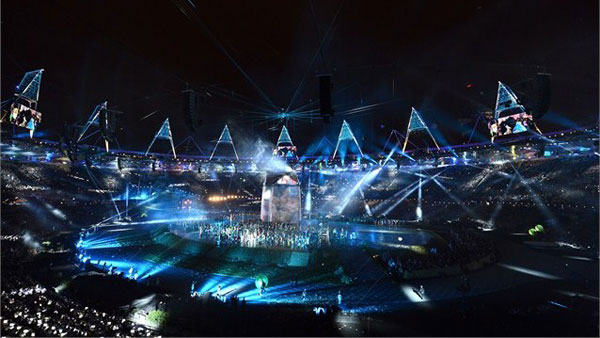 INTERIOR VIEW of the Olympic Stadium. –Photo taken from london2012.com

Boyle’s challenge was daunting: To be as memorable as Beijing’s incredible, money-no-object opening ceremony of 2008, the costliest in Olympic history.

“Beijing is something that, in a way, was great to follow,” Boyle said. “You can’t get bigger than Beijing, you know? So that, in a way, kind of liberated us. We thought, ‘Great, OK, good, we’ll try and do something different.'”

For the last time as president of the IOC, Rogge was to watch the Olympic flag being raised. He will step down in 2013 after completing the maximum two terms.

Mitt Romney, the Republican candidate for president, planned to attend the ceremony with his wife, Ann. Romney caused a stir in Britain by suggesting earlier this week that the country had “disconcerting” problems preparing for the games.

Other political leaders from around the world, U.S. first lady Michelle Obama and her daughters, and a sprinkling of European and celebrity royalty were also attending. 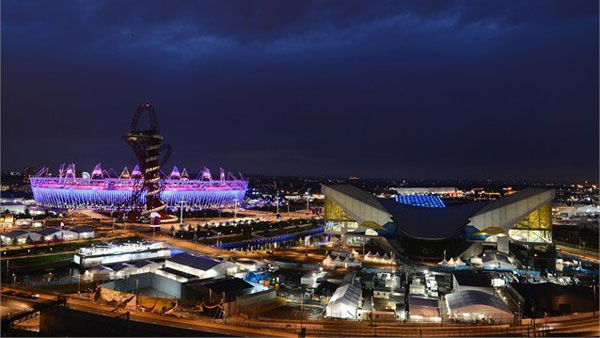 EXTERIOR VIEW of the Olympic Stadium and the Aquatics Centre are lit up during the Opening Ceremony at the Olympic Park on 27 July. –Photo taken from london2012.com 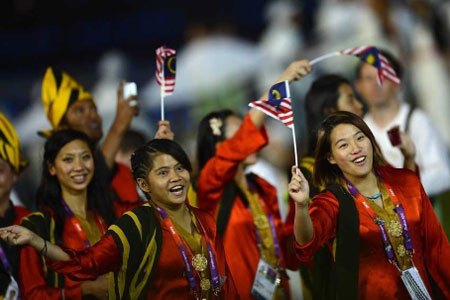 TEAM MALAYSIA: Members of the Malaysia’s delegation parade during the opening ceremony of the London 2012 Olympic Games on July 27, 2012 at the Olympic Stadium in London. –AFP photo