Tuesday, October 19
You are at:Home»News»Sarawak»Driver found dead on bulldozer’s seat 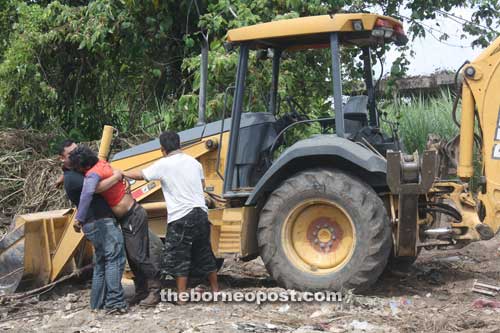 FAMILY LOSS: Two of Chalie’s sons carry their father’s body out of the bulldozer.

MIRI: A bulldozer operator was found dead by his supervisor yesterday morning.

The operator was sitting motionless on the driver’s seat of the machine at Jee Foh 8 here where he had been doing some clearing work.

Identified as Chalie Dong, 55, of Batu Niah, he had started working at the site three days ago.

According to sources, Chalie’s supervisor had called him at 11am earlier when Chalie answered his call.

However, when the supervisor went down to Jee Foh to see him (Chalie), he was surprised to see Chalie not moving, sitting still on the driver seat of the bulldozer.

Fearing for Chalie’s condition, the supervisor immediately informed the police.

He then rushed to Tudan to inform Chalie’s family about his condition.

Reba, a cleaner at a nearby Primary School in Piasau, who stayed a distance away from the site where Chalie was working said he was already not moving when she passed by the area at about 11.30am yesterday.

“I saw him sitting motionlesss … at first I thought he’s asleep…but then I started to sense something was not right,” she said when met by thesundaypost at the scene yesterday.

Chalie’s wife and his three children later arrived at the scene at about 12pm accompanied by the supervisor.

The cause of death has yet to be ascertained as police are still investigating.

The body has been sent to Miri Hospital for a postmortem.