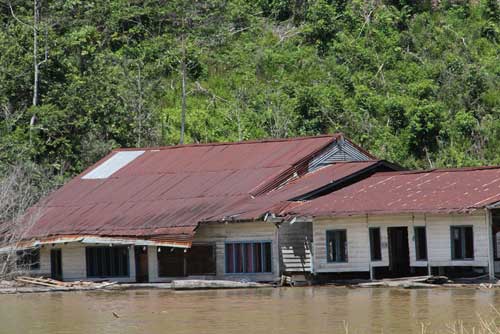 FLOATING CHURCH: The floating SIB church at Uma Jawe in a dilapidated state.

BAKUN: The 30 odd families of Uma Jawe, who are currently living in jelatongs (floating houses), have identified a site to build a new longhouse, revealed its village chief Janting Ibau.

He claimed they had obtained permission from the relevant authorities to do so.

“We would like to settle down for good as jelatongs are a temporary measure after our longhouses were submerged when the Bakun hydroelectric power (HEP) dam was impounded on October 13, 2010,” Janting told The Borneo Post at Uma Jawe, about four hours’ boat ride from here, on Friday.

He revealed that although most of the people from his village were relocated to Sg Asap Resettlement Scheme, some villagers preferred to stay behind.

“As they cannot be forced to leave their ancestral homes, they instead built jelatongs and stayed put.”

However, he said after almost two years of staying afloat, they wanted to have permanent houses so that they don’t have to constantly spend time and money to repair their jelatongs.

“Now many people from Sg Asap want to come back as this land is recognised as our NCR land.”

Janting also revealed that living on jelatongs was not something they were proud of as there were a lot of issues tied to it, such as sanitation, school, healthcare and pollution to the environment.

“I must admit that living in a jelatong is not a healthy lifestyle. But what can we do? We now hope that the relevant authorities will assist us in rebuilding our longhouse so that we can settle here permanently.”

Janting revealed that another key reason for his people to come back and to rebuild their longhouses was because of culture shock at Sg Asap.

“Living in Sg Asap is very expensive because we have to buy almost everything. Over here, we can fish and hunt and gather jungle produce easily. Life is definitely cheaper here compared to at Sg Asap, except that it’s too far away from amenities such as school and clinic.”

Janting disclosed that while his two sons were staying in his longhouse in Sg Asap, he and his wife were tilling the land behind their jelatong.

“We will plant paddy this year and we will open up more land to plant fruit trees and rubber trees as well. In the long run, we would be better off again.”

Meanwhile, Wilson Ugak promised the people there that their church, which was floated with oil drums and floating trees after the impoundment of the dam, would be rebuild.

Most of the people of Uma Jawe are Christians of the Borneo Evangelical Church (SIB) denomination.