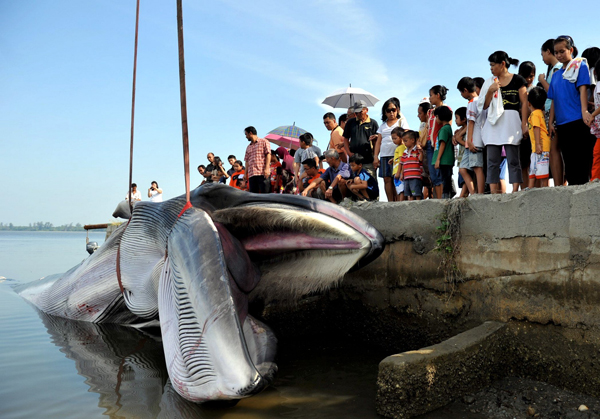 KOTA KINABALU: Sickness is believed to be the cause of the death of the 10-tonne whale that was stranded for more than 12 hours on Sungai Sitompok beach in Kuala Penyu Thursday.

Fisheries Department director Rayner Datuk Stuel Galid, said the weak condition the whale was in had made it difficult for rescuers to move it back into the open sea.

He said the strenuous effort taken to move the whale back into the open water was futile since the whale kept coming back to the shore.

“We will bury the carcass near the beach today (yesterday),” he said when contacted.

Kuala Penyu district fisheries officer Julin Bagang said the 17-metre long Baleen whale was believed to be distressed when it was separated from its group outside its natural habitat.

“From my observation, the whale’s senses were dysfunctional and the condition affected its body systems,” he said.

The whale was found stranded on the beach by a worker at Taman Pulau Tiga at about 9am yesterday. The mammal, however, died at 8pm.

Julin said they tried to rescue the mammal, including by pumping seawater over the whale with the cooperation from the Fire and Rescue Department, but without success.

“We just don’t have the expertise and skills to rescue the whale,” he said.

Julin said a contractor had been appointed to remove the carcass from the beach and bury it in a special location in Kuala Penyu.

The works, which began at 2pm, ended three hours later.

Its director Prof Dr Saleem Mustafa said together with all those present, UMS scientists led by Dr Julian Ransangan, Dr John Madin and M. Ali could only manage to push the mammal into deeper waters before it returned to the beach and breathed its last.

“This team of scientists and other supporting staff of the institute are currently in Kuala Penyu to gather more information on the whale.

“It was a solitary specimen, with no pod around. The whale did not have teeth, reflecting its habit of filtering small crustaceans and other such organisms from water for feeding.

“It is difficult to know what exactly caused the whale to come to the shallow water and beached. It could be due to old age, weakness, unable to support its body in the water column, sickness or disorientation,” he told Bernama here yesterday.

Saleem said the institute had mobilized its scientists who were working with other agencies to collect more data for scientific analysis.

“This marine mammal is a transient species which does not have a resident population in Sabah. We do not know which genetic stock it belonged to.

“If tissue samples are available, DNA analysis will be carried out for genetic characterization which will throw more light on the biology of this species,” he added.