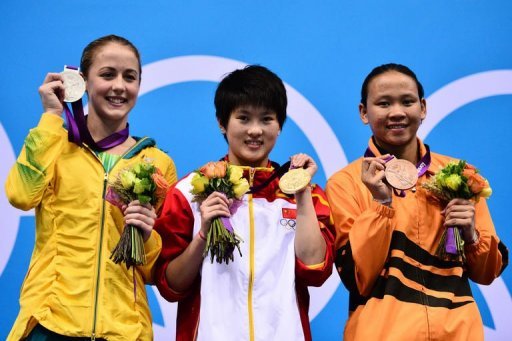 China’s Chen Ruolin was in a class of her own Thursday, defending her women’s Olympic 10m platform diving crown in dominating style to claim her second gold medal at the London Games.

The Chinese star peeled off five fantastic dives to score 422.30 points and beat her nearest rival by 55.8 points in the most convincing victory in the seven diving events so far at the Aquatics Centre.

Australia’s Brittany Broben took silver with 366.50 and Pandelela Rinong claimed the bronze with 359.20 to give Malaysia a first-ever Olympic diving medal.

It was China’s sixth gold diving medal in London out of seven events. The only dent in China’s dominance so far was Russian Ilya Zakharov’s triumph in Tuesday’s men’s 3m springboard ahead of both Qin Kai and defending champion He Chong, which ended China’s hopes of sweeping all eight golds.

“I’m feel very happy. I feel really honoured that I can win one more gold for the Chinese team,” Chen said. 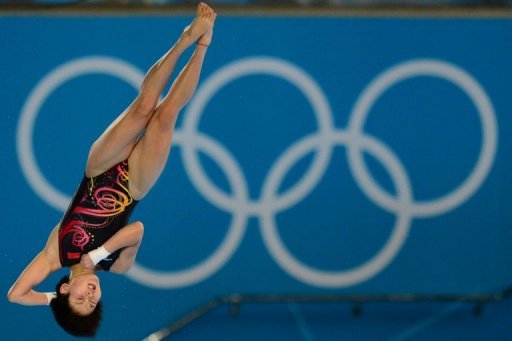 China’s Chen Ruolin competes in the women’s 10m platform final during the diving event at the London 2012 Olympic Games. Chen was in a class of her own Thursday, defending her women’s Olympic 10m platform diving crown in dominating style. –AFP

“I just hope that China can get more gold, the more the merrier.”

It was 19-year-old Chen’s fourth overall gold medal at the Olympics and she was in blistering form off the high tower.

“This proves that in the Chinese diving team, divers can win gold in consecutive Olympic Games,” Chen said. “It’s because I’ve participated in many big events and I have learnt from each competition.”

Chen, who won the individual and synchronised events as a 15-year-old at Beijing four years ago, was unchallenged in the prelims, semi-final and the final of the London platform event.

Chen earlier won the synchronised 10m platform with Wang Hao and said she hopes to stay in diving and compete at the next Rio games in 2016.

Broben, 16, ensured she won silver with a closing 81.60 for her back two and a half somersault with one and a half twists to claim Australia’s first medal in the platform event since Chantelle Michell-Newbery’s gold medal win and Loudy Tourky’s bronze in the final at Athens in 2004.

“Please don’t pinch me because I never want to wake up. It’s amazing,” Broben said.

“It’s unbelievable, amazing. I was really nervous on that last dive. I couldn’t be happier. I was in (fourth) and I didn’t want to let it slip away. I had to do it.”

Beijing finalist Melissa Wu of Australia missed out on a medal by 1.1 points.

“My coach told me ‘don’t be too nervous. If you want to perform your best, you must relax'”, Hu said.

“I thought it was all right during the warm-up before the competition but when I actually stood on the platform, I was very nervous.” –AFP