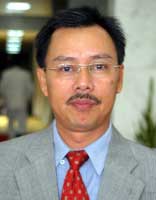 SIBU: State BN secretary-general Datuk Dr Stephen Rundi has quashed rumours that some BN elected representatives from the state would be defecting soon.

“The opposition is trying to ride on the Sabah political sentiment to influence Sarawakians by making this speculation. They hope to destabilise us, a BN stronghold, by doing so,” he told The Borneo Post when contacted yesterday.

In fact, Dr Rundi said he was not perturbed by this propaganda as it was nothing new.

“BN Sarawak remains very much intact and are united as one force behind the prime minister and chief minister,” said Dr Rundi, who is also Assistant Minister of Public Utilities (Electricity and Telecommunications).

An online news report had recently speculated that several state BN MPs might defect to the opposition in the coming weeks.

On Saturday, Deputy Minister of Science, Technology and Innovation Datuk Fadillah Yusof deemed the rumours as “mere fabrication” and “lies”.

At a press conference in Kuching on Saturday, Lajim told reporters that chances were high that some of his former colleagues might be leaving BN soon.

In fact, PKR de facto leader Datuk Seri Anwar Ibrahim, who was also present at that press conference, said some “interesting announcements” were brewing in Sabah.

Ahmad also expressed confidence that the situation in Sabah would not spill over to Sarawak as the Sarawak BN was very intact.