Tuesday, January 25
You are at:Home»News»Sarawak»MBKS establishes relationship with Korean city 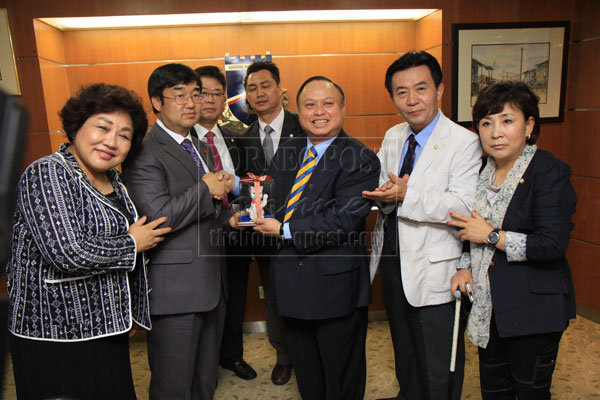 ESTABLISHING GOOD TIES: Chan (third right) presents a souvenir to Hwang as other members of his delegation look on. — Photo by Kong Jun Liong

KUCHING: Friendship does not only occur between people but can also be developed between cities.

Chan, who warmly welcomed the group said: “We are very glad and honoured with the visit because despite the typhoon disaster in your city, you still make the effort to visit us.

“We in Kuching South also have interest in mutual exchange with Guro District Council because we believe this will lead to the development of both cities and benefit the people of both sides as well.”

He hoped that with the opportunity to enhance and develop friendship with the South Korean district council, both sides would expand the range of cooperation beyond culture and tourism to include economy, trade, education and technology, among others, for their mutual benefit.

In a statement distributed to the press, Hwang said Guro District is located at the southwest region of Seoul, the capital city of South Korea, and has been playing a pivotal role in Korea’s economic growth and is now well on its way to lead the country into the 21st century information society as a digital city centred around digital industrial complexes, giving it attention from the rest of the world.

“Kuching, with all the potential to develop in future and our Guro District with a good infrastructure of high tech digital industry, I confidently assure our exchange would bring both cities infinite synergy effect.

“The members of Guro District Council, including me, have strong interest in mutual exchange between Kuching,
that has great possibility to develop, and our Guro District, and I trust our continuous exchange would lead to development in both cities and also would promote the welfare of the citizens,” he said.