Sunday, May 22
You are at:Home»News»Sarawak»Habitual motorcycle thief nabbed after taking shower 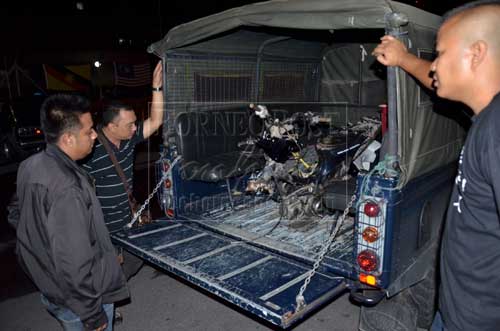 RECOVERED: Police officers take a closer look at the recovered bike which had been stripped of all its parts.

KUCHING: A habitual motorcycle thief has just finished showering to clean himself up after dismantling a stolen bike when police showed up and arrested him.

The 32-year-old was nabbed at his house at Kampung Stakan Melayu in Kota Samarahan here around 9pm on Friday after the motorcycle was reported stolen in Bintawa from a factory at noon the same day.

According to sources, the suspect, a habitual motorcycle thief, had just stepped out of the bathroom after stripping the stolen machine of its parts when police arrived at his house.

After a check confirmed the dismantled bike was the one stolen in Bintawa, police arrested the suspect and detained him for further investigation.
The stolen machine was seized and brought to District Police Headquarters as evidence.