Tuesday, August 9
You are at:Home»News»Sarawak»Dangerous complacency 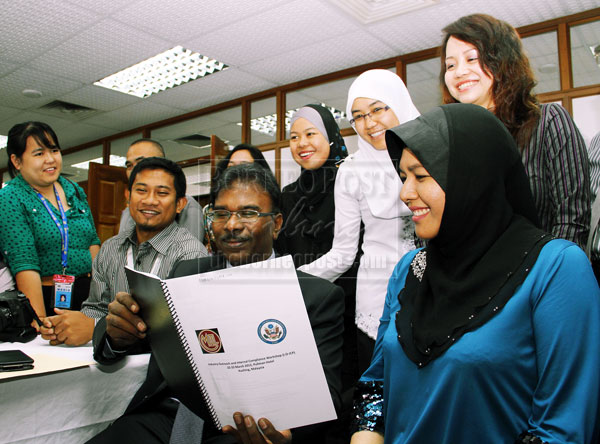 KUCHING: Most export, logistics and brokerage companies in the state are not aware of the danger they are exposed to when handling strategic items without finding out who they are dealing with.

Strategic items include dual-use items that are used in commercial activities but could also be converted into weapons and other offensive gadgets for military use or terrorist attacks.

“It is important for exporters to know who they are exporting to and who are the end users of their products as there may be people with ill intent who import the products to make into weapons.”

Companies involved in activities relating to export, transhipment, transit and brokering of strategic items must register under the Strategic Trade Act (STA) 2010 he added.

However, despite numerous outreach programmes, very few companies involved in handling strategic items in the state took the initiative to register with Miti under the Act.

Only 10 out of the 362 companies registered under STA 2010 in the nation are from Sarawak and they are mostly from the manufacturing sector and the oil and gas industry.

Mohamed said perhaps the other companies did not take the Act seriously because they were complacent and thought they could get away with the law.

The STA 2010 Act was passed in line with the United Nations Security Council’s resolution to establish an export control system to prevent the spread of weapons of mass destruction and to facilitate trade in a secure, legal and weapon-free environment.

“This Act concerns many Sarawakian companies, especially those involved in oil and gas as well as ship-building. Many items in these industries are of dual-use, meaning they can be developed into some other things, including weapons of mass destruction.

“If companies are not aware their products are strategic items, they could get into a lot of trouble,” Shahabar pointed out.

He said Malaysia is the second country in Asean, after Singapore, to pass the Act and warned companies which had not registered they could face action as it had been fully enforced.

“We are talking about a law that has extra-terrestrial jurisdictions. One of the objectives of the Act is to protect Malaysian exporters from being used as a channel for supplying illegal strategic items.

“If the companies are not sure if their products fall under the category of strategic items, they can talk to us at Miti’s Strategic Trade Secretariat,” he added.

The full STA Product List containing all goods that are considered strategic items can be viewed on the Miti official website at http://www.miti.gov.my.

Companies can register online through a hassle-free process known as ePermit STA at www.dagangnet.com, which is a web-based system that facilitates necessary permit processes from pre-registration and permit application until approval.