JOHOR BAHARU: The first Legoland theme park in Asia is officially opened to the public yesterday, moving Johor and Iskandar Malaysia closer to becoming a major entertainment hub in Asia. 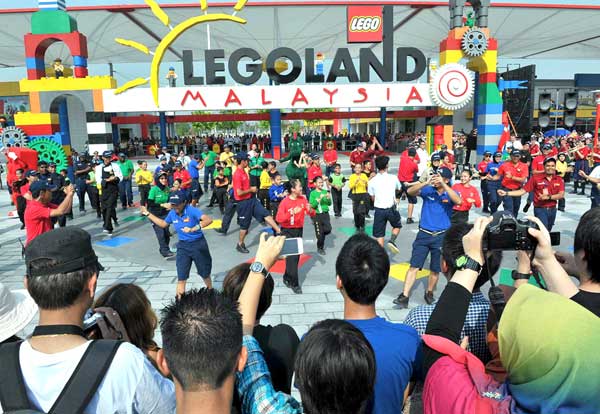 Thousands of visitors waited patiently in line to enter the 30.7-hectares theme park in Nusajaya, the sixth worldwide after Denmark, United Kingdom, California, Germany and Florida, as early as 7am.

Siegfried Boerst, general manager of Legoland Malaysia, who oversaw the contruction of the park, was understandably emotional as he personally welcomed the first visitor to the park.

“It is a very emotional moment for me and to everybody in Legoland. I am very fortunate to be part of the moment for Legoland Malaysia and everybody here,” he told reporters here yesterday.

He said it was great to see the smiles and happy faces of the visitors especially the children as they enter the park to enjoy the more than 40 interactive rides, shows and attractions.

The park, which was inspired by the Danish toy bricks, is divided into seven themed areas and comprised more than 50 million LEGO bricks.

“To see the happy faces and smiles of children enjoying the rides and the park, that is why we build Legoland … to see that. It is an exciting moment for us,” said Boerst.

Eventhough the theme park was only open at 10am yesterday, Legoland Malaysia nevertheless, was already a hive of activities way before that as the park’s management lined up several programmes to entertain the waiting visitors.

Among them were performances by a brass band brought from the LEGO’s hometown of Denmark and a special dance dubbed ‘The Power Dance’ by the Legoland Malaysia employees.

As thousands of visitors made their way to Legoland Malaysia theme park yesterday, Boerst said, the park, which was build with a cost of RM720 million, is extremely important as it is the first in Asia.

Asia, Johor and Iskandar Malaysia, according to him, is the location to be in right now as it is a growing market, compared with the shrinking market of Europe due to the Eurozone financial crisis.

Legoland Malaysia, situated within Iskandar Malaysia, according to him, could not ask for a better location.

“Johor and Iskandar Malaysia is a great location which can be reached by millions of people in Asia. Singapore and Johor is becoming a major entertainment hub in Asia,” he said. — Bernama

The management of Legoland Malaysia, he said, really believed with the potential and future of Iskandar Malaysia, a special economic zone bordering Singapore.

“We really believe in the Iskandar Malaysia region … it is becoming a major entertainment hub. Johor has a strong resident market and it is easy for millions of Asian from all over the world to reach here,” said Boerst.

The Legoland water park and hotel, which is located adjacent to the theme park, is scheduled to open next year and 2014, respectively. — Bernama