Tuesday, May 17
You are at:Home»News»Sabah»Body of boy found in lake 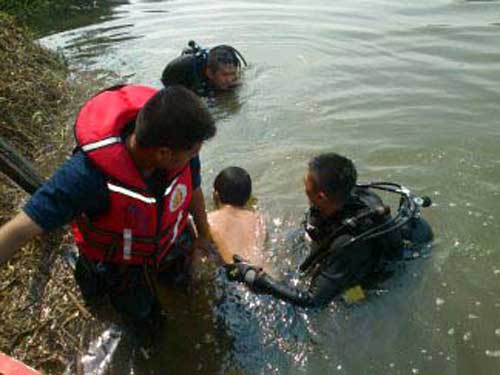 Fire and Rescue scuba personnel retrieving the victim’s body out from the lake yesterday.

PAPAR: The body of the 15-year-old boy who was reported missing and feared drowned in a lake at Kampung Biau on Friday was recovered yesterday morning.

Gregory Janip’s body was found around 9.40am, 18 hours after he was reported missing, by a scuba team from the Fire and Rescue Department.

It is believed that Gregory and three of his school mates were about to take a swim when he slipped and fell into the lake.

His friends tried to save him but to no avail and immediately alerted the nearby villagers.

The scuba team was dispatched to the scene to carry out a search operation, but later was called off around 6.30pm on Friday due to darkness.

Papar Fire and Rescue station chief Dustan Peter, said the victim’s body was found about six metres away from the spot where he fell.

Dustan said Gregory’s body was taken to the Papar Hospital for post mortem and his family members have been notified.