Wednesday, December 7
You are at:Home»News»Sarawak»Cop arrested for discharging pistol in pub at Travillion Mall 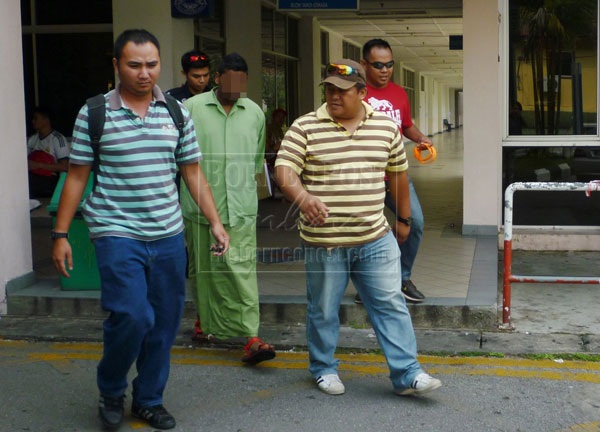 UNDER 4-DAY REMAND: The errant cop, in hospital garb, is led away from the Sarawak General Hospital to the courthouse.

KUCHING: A police constable based in Sri Aman was arrested and remanded after he thrice discharged a pistol at a pub in Travillion Mall here early yesterday morning.

The 21-year-old, originally from Peninsular Malaysia, was arrested by fellow police officers immediately following the 3.15am incident, which saw him fire his service pistol once on the floor inside the pub and twice more in the air outside.

State police commissioner Datuk Acryl Sani Abdullah Sani, who confirmed the incident, said the constable is attached to the General Duties Division at Sri Aman district police headquarters and had just finished taking part in an operation in Serian. 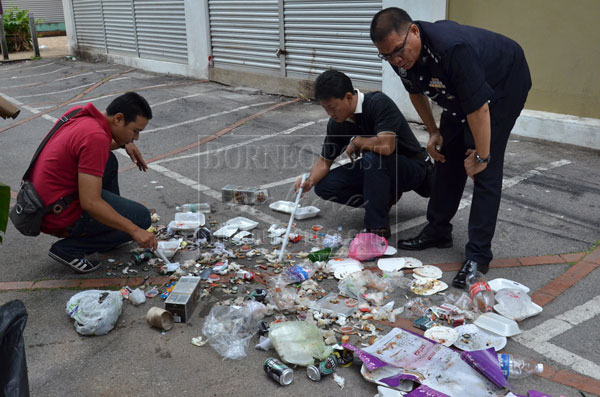 LOOKING FOR CLUES: Police sift through discarded items outside the pub in an attempt to locate the bullet casings.

“He was drunk at the time of the incident when he discharged his weapon once near the bar counter and twice in the air outside.

“A worker at the pub was hit on the neck by shrapnel from the initial shot, and also had the pistol pointed in his direction by the constable,” Acryl said via text message.

He added that the suspect was sent to the hospital following his arrest to undergo blood and urine tests.

Acryl said the constable was supposed to have returned the pistol — a standard-issue Walther P9S 9mm — to the police armoury once he was off-duty but had not done so.

He will be investigated under Section 506 of the Penal Code for criminal intimidation as well as Section 37 of the Firearms Act 1960.

Acryl stressed that the police viewed the incident very seriously and would take the “sternest possible action” under the law against the errant cop.

“The police take this matter very seriously and there will be no compromise whatsoever in order to ensure all officers and rank-and-file personnel adhere to the laws of this country,” he said.

Prior to the incident, the constable and two male friends are said to have been drinking whiskey in the pub right up to closing time.

A patron told police officers at the scene later that he was at the bar counter when the plain-clothes constable approached the bartender asking to be served more drinks.

The bartender, however, refused the request as operational hours had ceased, prompting the cop to draw his gun and shoot.

The patron said the constable’s two friends quickly grabbed and dragged him out of the premises, where two more shots were heard.

Another customer, who emailed The Borneo Post immediately following the incident, said he called the Padungan police station for help when the shooting broke out and was told that a Mobile Patrol Vehicle (MPV) unit was on its way.

The customer said he waited for 10 minutes but no MPV showed up, and called the police station once more to request for assistance before fleeing the scene as he feared for his life.

In his email, the customer queried why the public were not allowed to drive while under the influence of alcohol, but police personnel who drank at pubs were allowed to carry loaded weapons.

Following the early-morning shooting, CID and forensics unit personnel scoured the outside of the pub and recovered two bullet casings.

A source, meanwhile, disclosed the constable was produced in court yesterday where police obtained a four-day remand order against him to facilitate further investigation.

Previous ArticleMount Kinabalu Climbathon is back
Next Article Sports associations must be aggressive, says MSNS chief