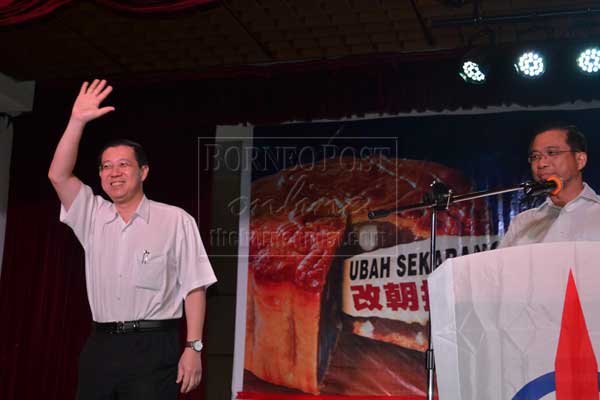 ROUSING WELCOME: Lim waves to his supporters upon arriving at the function. On the right is Ho Leng.

SIBU: The prime minister, chief ministers, ministers and portfolio holders should all declare their assets in order to clean up the nation’s biggest woe – corruption.

The second way is to prohibit family members of ministers and other leaders from tendering for government projects.

“Thirdly, tender for government project should be open tender and not restricted to certain contractors in order to ensure its integrity,” said Lim, who is also chief minister of Penang.

“Fourthly, all whistle blowers should be protected.  However, their reports must have concrete evidence or else the one who forwarded false reports should be prosecuted.”

The fifth measure pertains to stating clearly the source of all political contribution in order to avoid illicit sources of funds.

“Lastly, elected representatives should be stripped of their post if they were found to have spent beyond their financial capability.”

Meanwhile, state DAP chairman Wong Ho Leng, who was also present, said speculations that  Malaysia would be turned into a Christian state if Pakatan came into power was baseless because only 9. 1 per cent of Malaysians
were Christians while the percentage of Muslims and Buddhists stood at 60 and 21 per cent respectively.

On the other hand, he also voiced vehemently that Pakatan would definitely resist the idea of transforming Malaysia into an Islamic state.

“The Federal Constitution has clearly stated that the country is a secular state.  No matter what other people say about it, Malaysia would not become an Islamic state as long as DAP is there.”

On the 13th general election, Wong opined that Datuk Seri Najib Tun Razak would only call for it next year.

However, Wong, who is also Sibu MP and and Bukit Assek assemblyman, reminded DAP members to continue to strive hard for victory.

“I predict that the 13thgeneral election will only be called after the distribution of BR1M 2.0.”