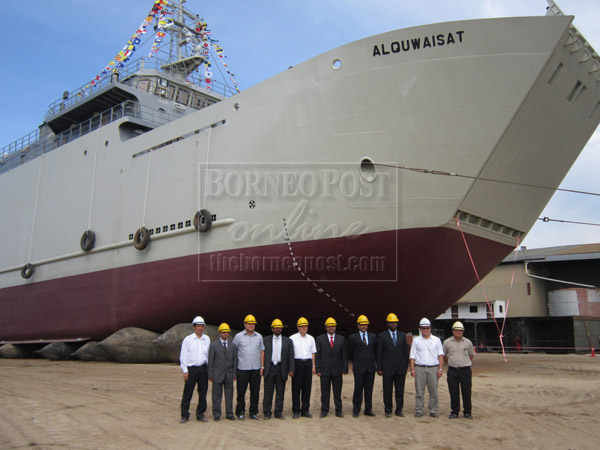 BUSINESS PARTNERS: Shin Yang executives and representatives from the UAE Navy taking a group photograph after the ceremony.

MIRI: Shin Yang Shipping Corporation Bhd (Shin Yang) yesterday displayed the capability that a local company can be in par with the established global shipping and ship building industry.

The United Arab Emirates (UAE) Navy gave it recognition and acknowledged its local expertise and skills in ship building by commissioning it to build two 80M LCT training vessels.

“Our business relationship with the UAE Navy started way back in 1998 after we sold a vessel,” said chief executive officer Captain Ting Hien Liong at the launching ceremony for the training vessels – Alquwaisat and Alputaisi at Piasau Slipways Sdn Bhd in Kuala Baram.

The business relationship blossomed and a series of order for vessels were made by the navy to Shin Yang over the years, said Captain Ting.

“Alquwaisat and Alputaisi were the eight and ninth vessels commissioned by the UAE Navy to us and we believe that this cordial business relationship will continue to grow,” he added.