Sunday, September 26
You are at:Home»Features»A ‘Nature’ escape for Sibu townsfolk

SITUATED only six km from Sibu town, Bukit Lima Forest Park is one of the favourite recreation spots for the townsfolk, seeking a de-stressing walk at the end of a long day or a busy week. 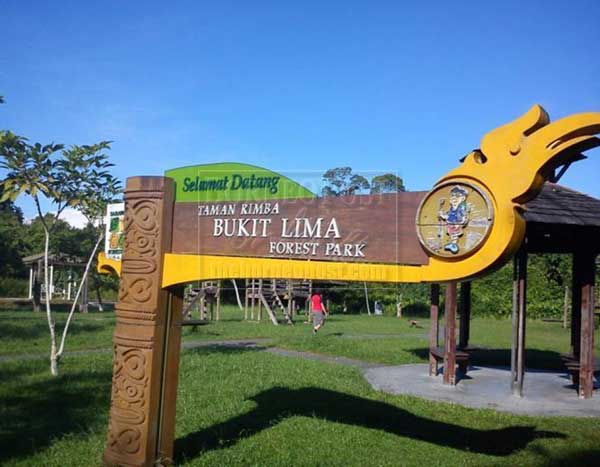 HEART OF TOWN: The Bukit Lima Forest Park is situated at the centre of town.

Every afternoon at about 5 o’clock, health-conscious residents are seen jogging or brisk-walking at this forest park in the heart of Sibu town.

And every weekend afternoon, more families are seen taking leisurely walks or admiring Nature through observing wildlife as they saunter along the two winding trails of wooden planks — one of 3.5km and the other, 2.5 km – at the park, taking three hours to complete the stroll under a green canopy.

Apart from recreation, the park is also a valuable venue for research and educational purposes, according to Nickson Joseph Robi, warden of Lanjak-Entimau Wildlife Sanctuary of Sarawak Forestry Corporation (SFC), Sibu.

“It has also become a popular place for corporate bodies, clubs and associations to organise activities such as treasure hunt and joggerthon,” he said in his paper — Bukit Lima Forest Park: The Small Urban Forest Park in the Big Town — at the Urban Forestry Conference in Sibu from Oct 2 to 6.

As one of the earliest nature parks to be gazetted as a protected area in October 1929, Bukit Lima Forest Reserve covers 390ha of secondary peat swamp forests.

Situated amidst housing estates and an industrial area, the park, the only urban forest in Sibu town, serves as the “green lungs” for residents within the vincinity and beyond.

With increasing public awareness of the need to conserve and protect this peat swamp forest park, there have been requests from locals to convert it into a forest reserve. 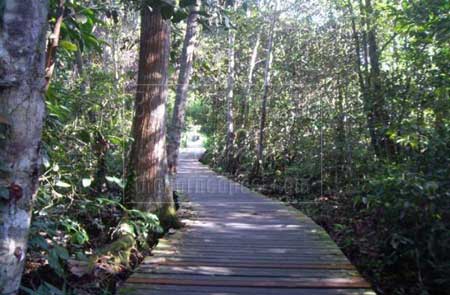 COOL WALKWAY: The wooden trails in Bukit Lima Forest Park are shaded by a green canopy.

“We are now applying to convert Bukit Lima Forest Park into a forest reserve under the National Parks and Nature Reserves Ordinance 1998.

“The purpose is to conserve, protect and preserve the area. And if it is converted into a nature reserve, we can collect revenue for better maintenance and provision of facilities,” Nickson explained.

The park is now managed by SFC for protection and conservation of its biodiversity. There are three field staff — a ranger and two maintenance assistants. At night, 24-hour monitoring is carried out by the staff and hired security.

The park — though situated in a well-populated area – is still rich in biodiversity. There are seven species of webbed-wing mammal such as bats (chiroptera), one species of primate and two species of rodent, to name a handful. 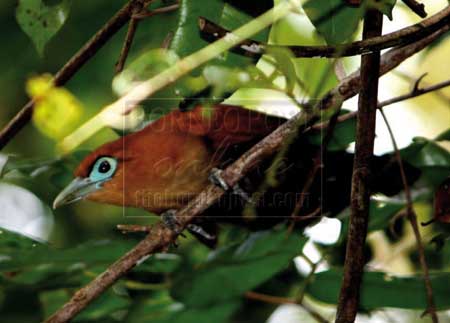 As for birds, 39 species have been spotted. Some more common ones include oriental black hornbills, kingfishers, malcohas and herons.

Mushrooms, ferns, fungi, insects and butterflies can also be seen in the surroundings of the two trails.

For conservation, activities such as tree phenology study, wildlife survey, camera trapping and primate monitoring have been carried out to keep tabs on the biodiversity of the area.

“Managing the park means facing issues and challenges, caused by both man and Nature,” Nickson pointed
out.

Vandalism used to be rampant but has declined with 24-hour surveillance. However, littering is still a major problem.

Among other illegal activities are collecting non-timber forest products, hunting and fishing
and illegal entry. However, these are also decreasing with rising public awareness, according to Nickson.

“If we can convert the park into a nature reserve, it will be easier to manage,” he said. 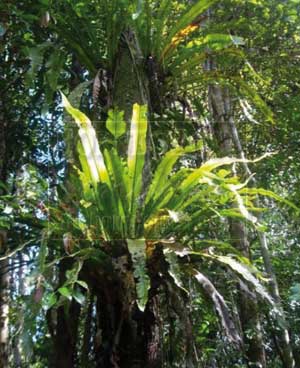 PRESERVING BIODIVERSITY: Though the park is open to the public, Sarawak Forestry Corporation makes sure the biodiversity is not affected.

The greatest hazard is forest fire.

In September 2010, a resident from a nearby housing estate started a fire to get rid of some foliage waste but the blaze turned into a forest fire after it burned out of control and spread to the park. It took two weeks to put out the fire.

The park is surrounded by housing estates.Though there is proper boundary demarcation, encroachment still happens, posing one of the challenges for maintenance.

“At the same time, local residents have complained some long-tail macaques have been intruding into their gardens to steal fruits,” Nickson noted.