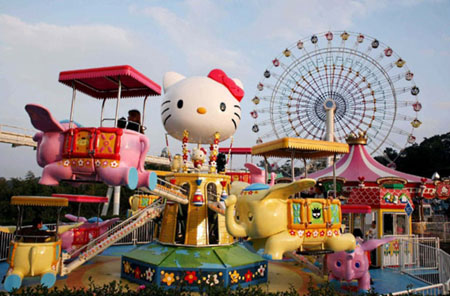 “For the first year of operation, we are looking at half-a-million visitors to the theme park,” he told reporters during the Puteri Harbour Family Theme Park’s media familiarisation tour yesterday.

TAR he said, was very proud and happy to have opened two more attractions in Puteri Harbour, the Sanrio Hello Kittty Town and The Little Big Club, providing more reasons for everyone to spend quality time in Nusajaya.

Asked about projected revenue for the family theme park during its first year of operations, he said, TAR hoped it would be positive and in the double- digit range.

The Puteri Harbour Family Theme Park is a four-storey building, located strategically in Johor’s administrative capital, Nusajaya, and is the second internationally-acclaimed theme park to be opened in Johor after Legoland Malaysia several months ago.

It provides a series of unique experiences and excitement through popular children’s characters from Lat’s Place, Sanrio Hello Kitty Town and the Little Big Club.

It will be the first time in the world that the five popular global characters are housed in a single themed attraction, adding originality and exclusivity to the Puteri Harbour Family Theme Park.

According to Tunku Ahmad Burhanuddin, the official opening of Puteri Harbour Family Theme Park would most probably be in early next year, to coincide with the opening of other attractions in Puteri Harbour.

Besides the family theme park, the other attractions slated to open for business include hotels, food and beverage outlets and a shopping complex.

Asked about job opportunities with the opening of the Puteri Harbour Family Theme Park, he said, overall between 800 to 1000 work in the theme park, including 200 staff under direct employment.

The two park pass tickets to Sanrio Hello Kitty Town and The Little Big Club are priced at RM110 for regional tourists and RM85 for MyKad holders.

Theme park visitors can also purchase tickets at promotional price on www.redtix.com at RM85 for non MyKad holders and RM65 for MyKad Holders.But this promotion is only valid for tickets dated the latest, Nov 7, 2012.