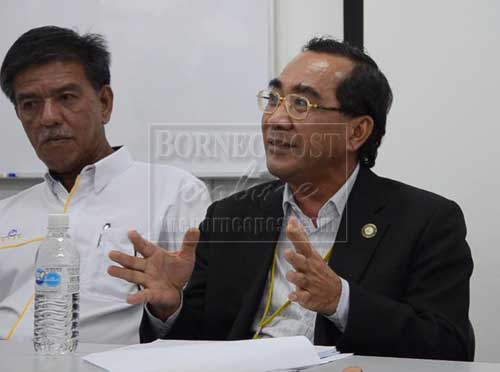 COMPREHENSIVE PLANS: Mohidin (right) and Mior are seen at the press conference.

Representatives from Tokuyama Ltd, which will produce polycrystalline silicon at SIP, made the request during a site briefing on Tuesday.

Such a facility would cut the cost of transporting scheduled waste for treatment in Peninsular Malaysia.

“Presently, SIP has not allocated for such a scheduled waste treatment facility and this is indeed an investment opportunity for investors specialising in waste management,” he said.

He pointed out that BDA would not be in charge of SIP’s scheduled waste management treatment as the local authority would only be responsible for household and general waste management for Samalaju township and other existing towns.

Mohidin explained that there would be a specific area in SIP for a waste landfill but called on the ministries concerned to examine including a scheduled waste treatment facility.

He said each of the industries to operate in SIP would have their own standard operating procedures for environmental health and safety, which would be strictly monitored by the Department of Environment.

“Samalaju is in the process of being gazetted as protected areas as far as security is concerned and BDA will employ auxiliary police officers. We hope the ministries concerned will look through the needs of facilities in SIP,” said Mohidin.

“This port will be a specialised port to serve  industries located in SIP and its hinterlands,” he said, adding that the port situated on a 442ha site will not compete with Bintulu Port but instead work in synergy to complement it.

“That is why in our initial development plan, there will be no full container facility in Samalaju port,” said Mior.

Samalaju port’s construction was approved by the State Planning Authority on Nov 8, 2011 with an estimated total cost of RM1.812 billion.