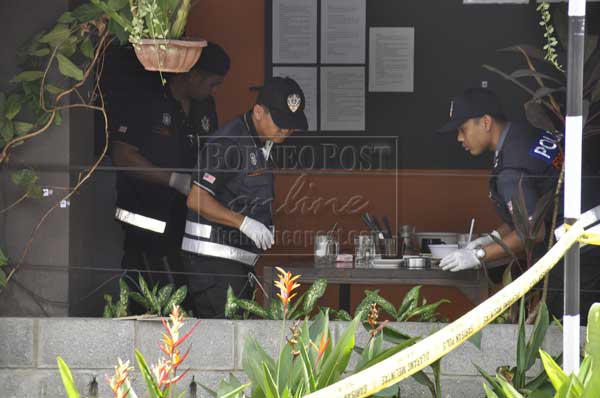 SIBU: A woman who was shot, apparently by stray pellets, at the back of her head while having lunch at a coffee shop at Pahlawan Road at 11.50am here succumbed to her injuries later in the afternoon yesterday.

Law Leh Kuong, 44, her husband Lau Ngik Yin, 42, also known as Ah Kang, her husband’s  male cousin and his spouse, along with a male friend were seated at the same table at the time of the incident.

Significantly Leh Kuong was the elder sister of Law Leh Hing the businessman who was gunned down in a daring attack at Brooke Drive at 10.15am here on Jan 11 this year.

The police chief here ACP Shafie Ismail when contacted yesterday disclosed that one shot was fired at the group from a shotgun from within 20 feet and the pellets also hit Ah Kang on the back of his neck while his cousin’s wife was wounded on her left arm, both their injuries were light.

The wounded were rushed to Rejang Medical Centre where Leh Kuong was admitted into ICU but  died at 3.15pm.

Some stray pellets also hit the wall of the premises and a police forensic team who, by coincidence, had just returned from investigating an earlier murder at Rantau Panjang, not far from here. They immediately cordoned off the crime scene.

The coffee shop is installed with CCTV camera which might provide some clues for the police.

Meanwhile, in Kuching, Sarawak Commissioner of Police Datuk Acryl Sani Abdullah Sani said a special investigation team from the state police headquarters would be deployed here to investigate the shooting.

He added that the team would be leading the investigation to uncover the motive behind the killing as well as identify the perpetrators.

“A special CID team from state police headquarters will be sent to Sibu to take charge of the investigation. The aim is to identify the motive as well as the criminals involved in the killing,” he said in a statement to the media yesterday.

Acryl also disclosed the husband of the deceased Ah Kang had interests in night entertainment outlets and timber and had also been arrested and sent to Simpang Renggam detention centre.

“Initial investigation indicated four men in a red Proton Wira Aeroback showing up at the scene. Two of them alighted carrying a shotgun and fired a single shot at the group from close range,” he revealed.

Acryl said the police were identifying the motive of the assault and also tracking down the identity of the plate number of the car.