Tuesday, November 24
You are at:Home»News»Sarawak»‘New requirements on timber a great concern’ 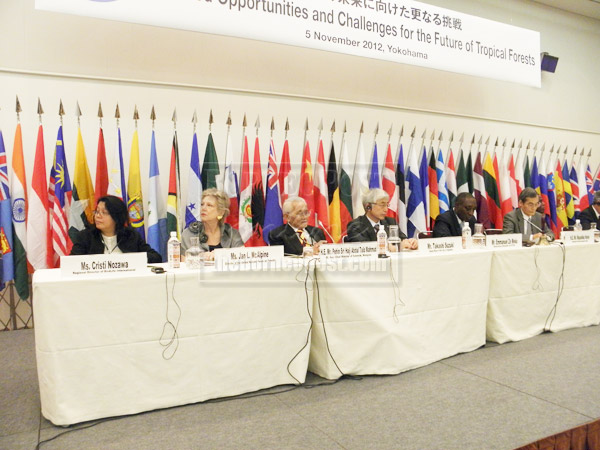 FOR THE FOREST: Taib (third left) with officials and board members of the ITTC during the opening ceremony.

TOKYO: Sarawak, a major producer of tropical timber, has expressed concerns on some emerging market requirements many of which are backed by legislation by certain major consumer markets.

For example, complying with the different standards required by importing countries would have some impact on timber production and trade in terms spiralling transaction costs.

“Sarawak has been observing the ever-evolving definitions of legality and sustainability by various international organisations and consumer countries. All of these are challenges facing the industry,” said Chief Minister Pehin Sri Abdul Taib Mahmud at the opening of the 48th Session of the International Tropical Timber Council (ITTC) here on Monday.

He added that the problems were further complicated by each consumer country having its own sets of requirements that were extremely challenging to meet on a global scale.

For example, he said the entries of tropical timbers into some importing countries had to go through third party verification and certification that contributed towards the escalation of costs without corresponding increases in their prices; nor had there been any increase in demand to meet the escalating costs.

“There must be legal prudence and pragmatism to appreciate the realities on the ground. If the requirements are too stringent, probably not many exporting countries could comply with them; if they are too ‘soft’ they will not be meaningful.

“Therefore, there must be some flexibility or protocol between the two extremes as the way to move forward. These are issues which ITTO must help to resolve to achieve the main objectives of the ITTA (International Tropical Timber Agreement) 2006,” said Taib, who is Minister of Resource Planning and Environment.

He praised the contributions of ITTO and donor community to the management and conservation of tropical forests.

“Sarawak would not be able to make substantial progress in the last two decades without the support, both technical and financial from ITTO.”

He reaffirmed the state government’s commitment to comply with ITTO’s recommendations on the extent of Permanent Forest Estate, Totally Protected Areas and the need for new institutional arrangements.

The ITTO Mission made a historic visit to Sarawak in 1989/1990 to assess the status of the conservation, sustainable management and utilisation of Sarawak’s forest resources. The independent mission was unprecedented in international forestry cooperation.

The members could visit any parts of the state and meet anyone they considered necessary to gather relevant information. Sarawak had already invited the Food and Agricultural Organis4ation to assess forest resources and make recommendations for their sustainable management, conservation and research.

The ITTO’s recommendations for Sarawak were for it to increase permanent forest estates in the mixed dipterocarp forest to six million hectares including one million hectares of industrial tree plantation.

This contributes to 58 per cent of Sarawak’s land mass of 12.2 million hectares.

Besides, Sarawak must maintain the production based on the prescribed limit of 9.2 million cubic metres per annum and set aside one million hectares of natural forests as totally protected areas, consisting of national parks, wildlife sanctuaries and nature reserves.

Taib said the state government had also established Sarawak Forestry Corporation to strengthen administration and management and introduced the Log Tracking System (LOTS) to monitor and control movement of logs along the chain of custody.

He said Sarawak would develop a million ha of tree plantation with fast growing species, in particular Acacia Mangum. So far, some 300,000 ha had been planted which shows a yield as huge as five times the indigenous species of trees.

He pointed out that biodiversity conservation, research and community development had been greatly reinforced through the implementation of many projects supported by ITTO and co-funded projects by the Netherlands, United Nations Development Programme (UNDP), Global Environment Facility (GEF) and Danish International Development Agency (Danced).