Tuesday, May 17
You are at:Home»News»Sarawak»Villagers mystified by strange animal 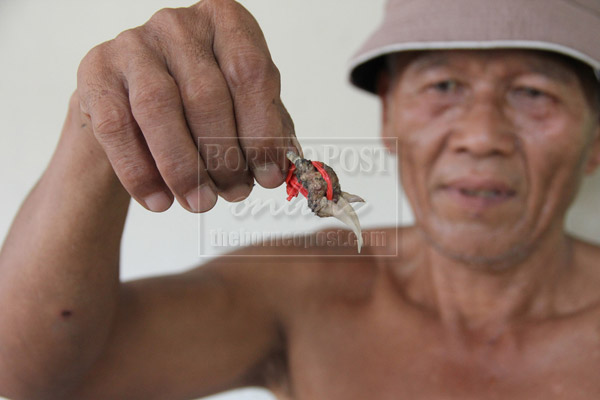 ECCENTRIC: Louis shows a sample of the animal’s claw that has been cut into half.

SERIAN: An Indonesian plantation worker and a 75-year-old farmer got the shock of their lives when they were attacked by an unknown animal species in two separate occasions earlier this month.

The farmer, Aris Kuna of Kampung Paon Gahat, was attacked by the rare animal while attending to his pepper garden about noon. The foreigner, however, was attacked a week later at a plantation near Kpg Baing while gathering oil palm fresh fruit bunches around 9am.

The animal that attacked the duo was described as having a ‘bear and wild boar’ resemblance. Fellow workers and villagers who saw the carcass, brought by the Indonesian, could not identify the animal species.

“It’s a rare species. None of the villagers could identify it when we saw the body and pictures of it. Some even took to the Internet to find out but to no avail. Could it be one of those already considered extinct?

“In all my life venturing into the jungle, hunting and such, I’ve never come across this species,” 62-year-old Louis Nyaoi said when met at his house in Kpg Mentung Marau, some 50km from here yesterday.

His son Jimmy Tubo, 27, believed that the rare animal could have reappeared due to the opening of the nearby jungle for agriculture and other developments.

When relating the ordeal of the foreign worker, Jimmy said the Indonesian had claimed that the animal gave a strange noise, firstly sounding like a hen followed by a wild boar sound, before proceeding to attack.

The victim alleged that the animal stood up on its hind legs when charging at him. He immediately swung his sickle, killing the animal instantly.

Jimmy, who works with the Sarawak Land Consolidation and Rehabilitation Authority (Salcra) added that the animal which attacked the Indonesian measured two feet long.

The animal also spotted a long mane and sharp wolverine-like claws. Another mysterious attribute to the animal was that it gave out foul smell only hours after it was killed.

Another local expert jungle trekker and hunter Paul Hnrnp, 41, said he never smelled anything like the stench. He also said that one could smell the stench from some 10 metres away when the Indonesian brought the carcass to the plantation’s FFB pick up ram for observation by fellow workers and villagers.

On Aris’ encounter, Paul, a security guard at SK St John, Kpg Mentung Murau said his grandparents were resting at a hut after tending to their pepper crops at the time.

“My grandfather (Aris) heard an unfamiliar animal outside the hut, so he went out to check. At first, he could not see where the animal was coming from although he anticipated that danger was lurking. 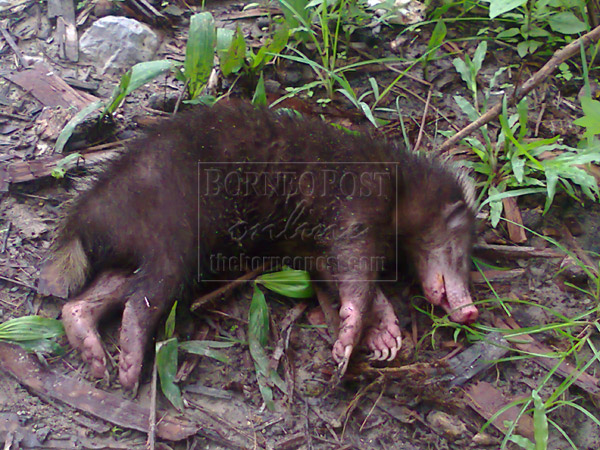 RARE SPECIES: A picture of the dead animal that attacked the Indonesian worker. None of the villagers who saw the animal could identify the species. 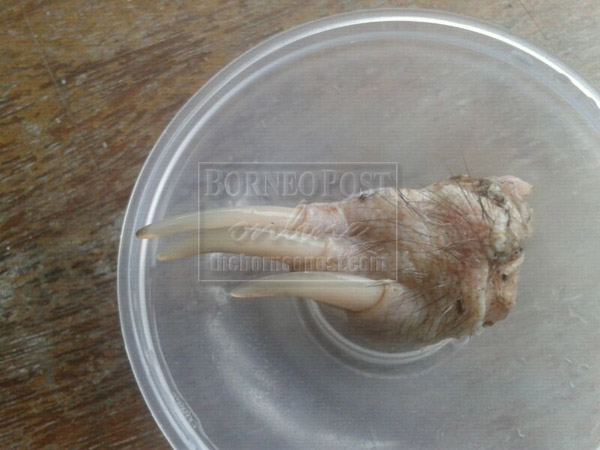 CLOSER VIEW: The portion of the animal’s foot.

“Sensing that the animal was near, he said a prayer before starting to swing his machete numerous times to fend off as what he described as an ‘invisible’ attack. Only after he felt he had slashed something that he saw a limb of the animal’s leg on the ground. Moments later, he saw the lifeless animal.”

Aris immediately dispersed the body at the jungle. As for the one that attacked the Indonesian worker, the body was partly buried at the plantation.

Not ruling out the fact that the animal could have been an endangered species, Louis believed the actions of both men as self-defense.