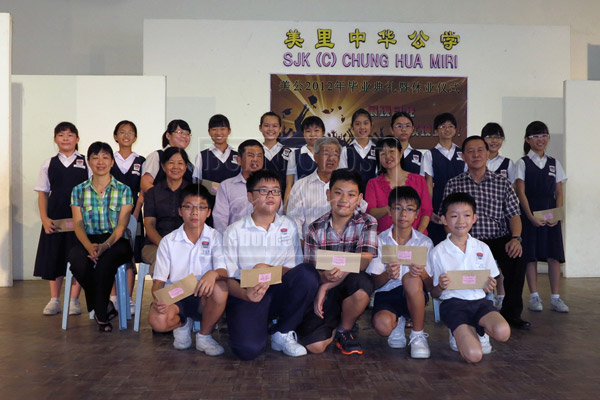 WELL DONE!: Tan (seated, second right) with 16 of the 7As scorers and the school board of management committee members. Seated at third right is the board chairman, Lee Chung Seng.

This was a significant increase compared to the 60.8 per cent pass rate last year, said acting headmistress Tan Ai Chu.

“Our best subjects are Mathematics and English with an increase in the overall pass percentage,” she told The Borneo Post at the school yesterday.

A total of 295 candidates sat for the examination.

Meanwhile, SJKC North Miri produced two pupils scoring 7As, two 6As, six 5As and four 4As.

The 7As scorers are Kevin Tang and Houng Nai Yuan while Liew Sze Nee and Ngu Chun Lian scored 6As.

The senior assistant said they did not score in Bahasa Malaysia and English but the school would work out an effective strategy to improve in future examinations.