Monday, May 23
You are at:Home»News»Sarawak»‘Genggam Jariku’ adjudged best Iban album 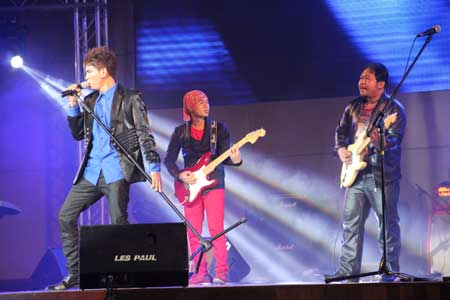 It was a good outing for Embat as he won the Best Video award for producing the video clip ‘Kumang’ which was sang by Hailey.

Gabriel who rendered the love song on stage that night was also nominated in the Best Dayak Song – Iban category but ‘Genggam Jariku’ was beaten by nine other entries. Apart from that, he was nominated with nine others for the Best Group/Duo vocal performance in the group category.

Apart from the Best Album category the other highlight of the night was the Dayak Artistes and Musicians Association (Dama) Special award which went to the all-female rock band Candy.

Candy comprising   Mary, Connie, Pat and Nancy performed so well in their early years (1980s and 1990s) that Life Records KL agreed to be their producer.

In 1997, the Malaysian Book of Records registered Candy as the first all-female rock band in the nation. Lately the band managed to break into Japan, US and UK markets with their latest album in which 60 percent of the songs are in English. Candy revealed that they managed to break into these markets because the

album ‘Absolute’ was promoted online instead of the conventional way.

As far as locals are concerned, their best ever hits throughout the years are the Bahasa Melayu song ‘Akan ku tunggu’ and Iban song ‘Ketegal ia’. They rendered these two songs live on stage on Saturday night. On ordinary days, Candy performed at gigs and social functions.

Among those making their appearances as guest singer/band on stage or as emcees on Saturday night were Bana Jimbat, Rachel Sia, Monica Midi, Jeffry Jack, comedians Kent and Stonton (popularly known as Bunyau and Mujap); Projek Pistol, Jimmy Palikat and Candy.