Monday, January 24
You are at:Home»News»Sabah»Cyclist nearly decapitated by cable 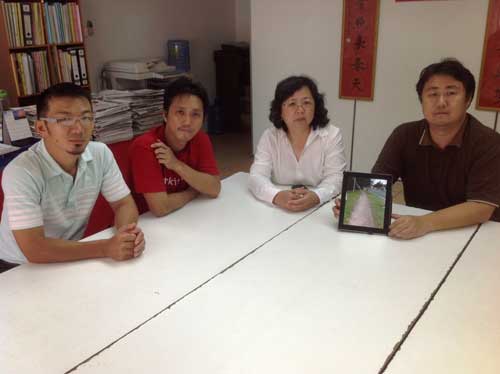 Richard (second left) and friend with Melanie and Charles from SAPP.

KOTA KINABALU: A local city resident narrowly escaped being decapitated when he was knocked to the ground after colliding with a carelessly placed telephone pole steel cable in the middle of a bicycle lane here.

Richard Sokial, 35, a writer and cycling enthusiast, had decided to use a bicycle lane provided at Lorong Mt Zion, Jalan Kolam, Luyang to avoid vehicular traffic on Wednesday evening.

Cruising down what he had thought was an empty lane, he did not anticipate coming face to face with the steel cable planted squarely obstructing his bicycle path.

The whiplash force threw him onto the concrete lane with his bicycle crashing on top of him.

“Luckily, I was wearing a bicycle helmet. Without it, I would have potentially lost an eye, or severed my neck upon it hitting the steel cable.”

Parts of Sokial’s helmet shattered on impact with the steel cable as he ducked to protect his face. His bicycle, a limited edition Raleigh mountain bike, was also damaged in the accident.

“Although I was wearing protective gear with a bright LED head lamp, the dark corner of that cycle lane caused the steel cable to be virtually invisible until it was too late to avoid,” he said.

Suffering from multiple bruises, tissue damage, wrist and knee injuries due to the unforeseen collision, he cited the local authorities’ indifference towards public road safety for the mishap, an incident that he claimed should never have happened if proper guidelines for bicycle lane design had been implemented.

Any standard bicycle path must have a vertical clearance between 2.4m-3.0m.

Poorly-lit roads, broken drain covers, potholes, irregularly high road curbs and lack of designated parking and connecting bicycle lanes in the city continue to hamper cyclists who desire for a more efficient way to commute through the city.

“As a responsible road user, when I entered the cycling lane from the main road, I thought that I had taken a safer route home. Instead, it was on that supposedly ‘safe’ cycling lane that I met with a bad accident that could have mutilated me and left me physically handicapped.”

Many city dwellers have recently taken up cycling for recreation and exercise.

For Sokial it is his main mode of transport to work and meetings in and around the city as well as to avoid the traffic jam.

“It only takes 25 minutes to commute, for instance, from Bukit Padang to Suria Sabah (city centre). It costs next to nothing and is environmentally friendly. On the other hand, it takes more than one hour – and two buses – along the exact same route using our current public transport,” Sokial said, citing the city’s current public transportation as being ‘consistently unreliable’.

He is currently undergoing physiotherapy to heal from his injuries.

It is unknown whether the cycling lane had been constructed before or after the telephone pole had been put in place.

What is certain is that neither the City Hall nor the Telekom Malaysia had properly monitored the construction or addressed the danger posed by the steel cable to unsuspecting cyclists.

Responding to the incident, Sabah Progressive Party (SAPP) Luyang assemblywoman Melanie Chia said that judging by the conditions that caused the accident, Sokial was lucky to be alive.

“If the rigid steel cable had been a few milimetres thinner, it could have been a fatal accident,” she said.

Chia lamented that such an oversight in implementation could happen in the capital city and urged the authorities concern to be more concerted in uplifting the quality of life of city dwellers.

She added that in view of the increasing number of cyclists the local authorities should construct more bicycle lanes with consideration given to safety of the users.

Sokial has lodged a police report following the incident and is seeking equivalent compensation from the responsible parties for his injuries and other personal damages sustained as the result of this mishap.

“The local authorities are to be held accountable for exercising poor judgement, lack of due diligence and for creating such unnecessary road conditions that put the lives of ordinary citizens in harm’s way. I hope that the same authorities will take immediate action to prevent another similar incident,” said the frustrated cyclist.