Monday, February 6
You are at:Home»News»Nation»Only BN can give people a better future, says Najib
For the freshest news, join The Borneo Post's Telegram Channel and The Borneo Post on Newswav. 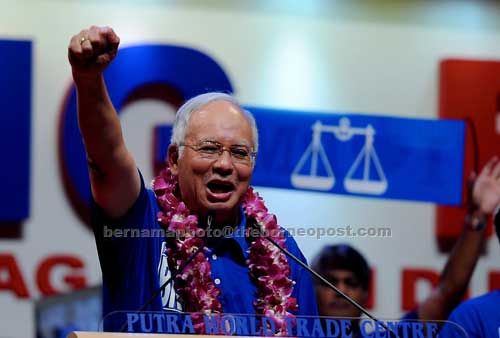 FULL OF CONFIDENCE: Najib raises his hand during his speech. — Bernama photo

KUALA LUMPUR: Prime Minister Datuk Seri Najib Tun Razak yesterday called on the people to give their full mandate to the Barisan Nasional (BN) government for another five-year term to secure a better future for themselves and the country.

He said this was because the BN government had varied experience in administering the country since 55 years ago compared to the opposition pact which had no basic understanding in charting a good direction for the country.

Najib said the BN government was sincere in helping all citizens and that after four years (since the last general election), its success was proven with the country recording an economic growth of 5.2 per cent, increased investments from domestic and foreign investors and more than 300,000 job opportunities created.

“The future cannot be gambled away. A vote for the opposition is a vote for uncertain future. But a vote for BN is for a better, secure and prosperous future,” he said in his speech when opening the People’s Progressive Party’s (PPP) 59th Annual General Assembly at the Putra World Trade Centre, here, yesterday.

Najib promised that as prime minister, he would do his best for the people and country, and also to govern in a fairer and more just manner in ensuring the people received the attention and benefits from BN’s policies and administration.

“As a national leader and BN chairman, I must be able to feel the pulse of the people and realise that today they have changed because of the government’s success in providing access to education and information communication technology,” he said.

Najib also reminded the 13 component parties of BN to move in one formation that was well organised and systematic towards one objective, that was, absolute unity and understanding so that BN would remain a strong party beyond compare with the opposition.

“Therefore, we must ensure zero internal problem in the party and also zero problem between the BN component parties. Without any major problem, (God willing) BN will win big in the coming general election,” he said.

Najib added that BN was determined to rise again after the ‘nightmares’ of the 12th general election and realised the message sent by the people to BN for it to bring about transformation to ensure a better future for them.

The prime minister also reminded the PPP election machinery to be always prepared and to re-energise and revitalise itself in struggling for BN in the coming elections.

A total of 4,047 party delegates attended the PPP Annual General Assembly with the theme, ‘BN Won’t Let Rakyat Down’. — Bernama