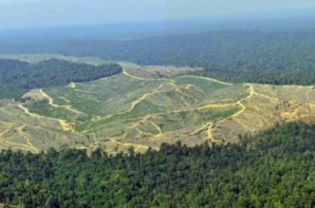 Logging concessions can be seen carved out of the once lush forest that stretches across Sumatra. (AFP Photo/Romeo Gacad)

Norway sent a delegation to Indonesia in the past week to discuss sustainability issues such as reducing the destruction of the Southeast Asian nation’s forests and curbing greenhouse gases, Jakarta Globe Report.

As Indonesia tries to improve its living standards across the country, the cost to the environment is immeasurable as land is cleared for gathering lumber and setting up palm plantations. More funding is needed to combat the destruction of the nation’s forests and to reduce air pollution, and Norway has set aside $1 billion for Indonesia in reducing emissions from deforestation and forest degradation (REDD).

A champion of sustainable resources, and with a $656 billion sovereign wealth fund to back it, the Scandinavian country is also trying to influence other nations such as Brazil and Guyana to follow its lead to reduce carbon emissions worldwide, including by protecting forests. Trees absorb carbon dioxide and release oxygen, and preserving forests helps to reduce greenhouse gases.

“The most cost-efficient way by far of reducing carbon emissions is preserving rainforests,” Trond Giske, Norway’s minister of trade and industry, said in Jakarta on Tuesday. “So, by one billion [dollars]we can help the climate maybe five times or 10 times more than spending it in other areas.”

Indonesia represents about 3 percent of the world’s forests, according to the World Wildlife Fund, and daily clearing in remote areas such as Kalimantan, Sumatra and Papua is reducing acreage each year and threatening native animal species such as the orangutan, Sumatran tiger, rhinoceros and the pygmy elephant. The United Nations’ REDD program estimated that in the period of 2003 to 2006, about 1.17 million hectares of forest was cleared or degraded annually. That annual loss is equivalent to more than double the total area of Brunei. Indonesia’s land covers 1.9 billion hectares.

As of 2005, Indonesia ranked third among 16 developing nations in the Asia-Pacific region by household carbon dioxide emissions, at 150 million metric tons, according to a report this year by the United Nations Development Program. Coal-fired plants that produce electricity also contribute to air pollution.

The amount being set aside by Norway for reducing reforestation, though, is small compared to what the Indonesian government says it needs. The UN-REDD program in Indonesia itself has a budget of $5.6 million, according to its website.

Hadi Daryanto, secretary general of the Forestry Ministry, said that the ministry needed at least $5 billion to $10 billion each year in its fight to reduce carbon emissions through programs such as education and raising awareness among Indonesians living on the edge of rainforests.

“The first approach that we use is through persuasion or education,” he said in an interview with the Jakarta Globe on Friday, adding that illegal logging is still occurring, but the ministry has tried its best to persuade and educate the local people.

With REDD+, referring to reduction practices plus a strategy in conservation and sustainable management, data about Indonesia’s forested area have been gathered and can be used in formulating guidelines for a program in protecting existing forests, Hadi said.

The government, companies, local people and activists are involved in producing the REDD+ Safeguard Information Systems.

“This is the most progressive, or we can say, ready-to-use, database. It’s also describing information about people’s rights and environment problems,” Hadi said. “Under law, there is a regulation about damage to the forest. We are still trying to persuade and educate the people, companies or even NGOs [nongovernment organizations],” he said.

The ministry, Hadi added, also plans to expand protected areas to include all peatlands and secondary forests.

Sanctions or any legal maneuvers have been strictly enforced against companies or people who do not protect the environment, Hadi said.

“We continuously take legal moves and also coordinate with the police,” he said. “And we hope the local and international trade also support this effort by not accepting noncertified wood.”

Activists, though, want more urgent action to preserve forests for their fauna and for animals to live in their natural habitats. An orangutan died from burns in West Kalimantan in late August when villagers tried to drive it out of a plantation area because of a lack of understanding in cohabitation between animals and humans in fringe areas.

“Illegal logging is one of the biggest problems we have in Indonesia,” said Dannissa Aryani, an environmental activist and member of the Greenweb Indonesia community.

“It’s making animals lose their shelter. In the end, they will die of hunger, some of them dead at the hands of people themselves,” Dannissa said. “Talking about the budget to save our nature, I think the budget will never be sufficient. With or without other countries, we still need to work on it.”

Greenpeace says on its website that it is campaigning for an immediate moratorium on forest and peatland destruction in Indonesia, and for zero deforestation by 2015. USAID is also working with the Indonesian government to help reduce by half greenhouse gas emissions and also to reduce by 50 percent the rate of forest degradation.

At the recent 18th United Nations Framework Convention on Climate Change in Doha, one of the important issues discussed was the adaptation to climate change.

Ari Muhammad, Indonesian program coordinator for Climate Change Adaptation, an NGO, said the Indonesian delegation hoped that it could reach a deal on steps that could be quickly implemented like financing, technology transfer and capacity development. He hoped the plan would be implemented in three years.

A report released on Friday by Climate Action Tracker, which tracks global warming, showed that Indonesia received a medium rating for its efforts in reducing greenhouse gas emissions.

Norway is trying to lead by example in reducing air pollution. The nation of about five million people says it gets all of its electricity from water generation and is investing in other forms of renewable energy as it pledges to reduce its carbon emissions by 40 percent by 2020.

Norway is also appealing for both rich and poor nations to become involved in the fight as it strives to limit the increase in the global average surface temperature — which currently stands at 15 degrees Celsius — to a maximum of 2 degrees Celsius.

NASA estimated that net global warming was about 0.4 degree Celsius between the 1880s and 1970s and expected temperatures to rise even further. The US agency estimated that 2011 was the ninth warmest year in data going back to 1880, but that nine of the 10 warmest years were in the 21st century.

“We believe that’s still possible, but we’re running out of time. Thus, it also has to be said that the systems of spending the Norwegian money on preserving the rainforest is put in place, because we think that prosperous agricultural activities, prosperous legal use of good logging, prosperous industries can be combined with stopping climate change.”