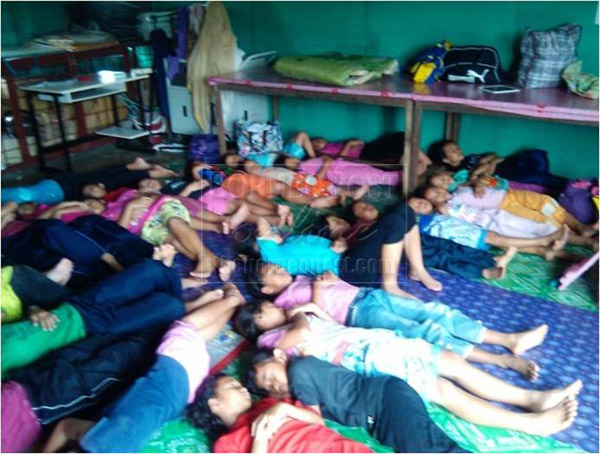 JAM-PACKED: Pupils sleeping in the headmaster’s quarters at SK Punan Ba in Belaga.

Nothing has been done to a primary school in Belaga nearly one year after its hostel collapsed, injuring 18 pupils – five seriously

SIBU: It is a picture of, at least, more than 20 school children sleeping in a room like packed sardines.

There is no room even for pillows to lay their heads on, not to mention some soft cuddly toys to hold on at their tender age as they leave home to stay in a boarding school.

Take another deep breath and visualise this — mosquitoes ‘singing’ menacingly around their ears.

They would probably not need a blanket since the small jam-packed headmaster’s quarters would have been too stuffy.

Then, in the middle of the night, came the rain and the children found themselves soaked due to the leaking roof.

If you think this is just a story, the truth is these children of SK Punan Ba in Belaga have been passing their long nights this way all throughout this school year.

Utusan Borneo, our sister paper, was alerted to the living condition of the pupils by a concerned parent yesterday with a handphone snapshot showing how the children have been living in a place no better than a refugee camp!

It is shocking to see that the boys and girls are sleeping together shoulder to shoulder.

On Jan 31, five primary school girls sustained serious injuries and another 13 had minor fractures when the wooden hostel of SK Punan Ba collapsed at about 8.15pm.

The incident occurred shortly after the pupils had attended private study in the school and were waiting for the hostel to open.

Headmaster Dan Bira had said the ramshackle hostel built in 1983 had been earmarked for renovation.

“Now we have no choice but to temporarily shelter these pupils in two of the teacher’s quarters,” he was quoted as saying in a report in The Borneo Post on Feb 4.

According to the concerned parent, most of the pupils have been moved to the headmaster’s quarters.

But as they are too many of them, they have to be contented with the crowded condition and sometimes getting wet whenever it rains.

The parent said the condition had worsened over the year and till today, there had been no sign that the Education Ministry is doing something to improve the situation.

“I hope the media canhighlight the plight of the pupils as the school year has now ended and that by the start of the new school year, the children will have a new and spacious dormitory to sleep in, the parent said.