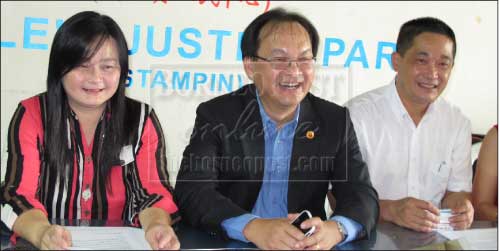 MAKING A POINT: Baru (centre) with See (right) and Voon after speaking to journalists.

KUCHING: The basis for arguing whether or not non-Muslims can use the word ‘Allah’ to refer to God must rest on its context, etymology and the relevant laws surrounding it.

Pointing this out yesterday was PKR Sarawak chief Baru Bian, who said political expediency should not and must not dominate the debate.

“Too much is at stake for it touches on the very heart, soul, and spirit of one’s belief and faith regardless of what one believes.

“I, therefore, urge those with differing viewpoints to exercise restraint, tolerance and goodwill. We must be reminded that we are indeed treading on Holy ground,” he told a news conference here recently.

Baru, who is also Ba Kelalan assemblyman, also called on both ruling and opposition coalitions to not use the issue as political posturing for the forthcoming 13th general election.

“This is not to suggest that we must avoid discussing it at the appropriate forum.”

He said that 10 per cent or more than two million of the population in Malaysia are Christians, and of this, about two thirds are non-Malay Bumiputera Christians mainly in Sabah and Sarawak.

“They rely on the Malay language or Indonesian Bible known as the Alkitab, which uses the word ‘Allah’ to refer to God.

“The word is of Arabic origin, which predates Islam. Christians of other ethnic communities like the Ibans in Sarawak refer to God as ‘Allah Taala’ or God Most High in their Bible known as the Bup Kudus.”

He, however, said not all Christians used the word ‘Allah’ to refer to God.

“The context of the Malay-speaking world using the word ‘Allah’ to refer to God rests on its etymology or the historical development of it.

“The first portion of Christian Scriptures translated into Malay was done in Indonesia for the Gospel of Matthew in 1612, which is 400 years ago.

“This was one year after the authorised version of the Bible was translated into English known as the King James Version (KJV). The Malay translation was also the first non-European language translation of the Bible. Surely, we can treasure this rare heritage as Malaysians.”

Baru stressed that East Malaysian Christians had been using ‘Allah’ to refer to God for generations, and had never caused confusion among Muslims before or after the formation of Malaysia in 1963.

“Why should this cause confusion now after half a century?”

He noted that Rukunegara uses ‘Tuhan’ and not ‘Allah’ to refer to God just like the Indonesian Pancasila.

“In terms of common usage, this is a reasonable expression. However, in the Biblical context, the world ‘Tuhan’ refers to Lord and not God or Allah.

“It is therefore not acceptable to ask Christians to switch the two words and take them to mean what they do not mean in their liturgy and worship.

He recalled the Kuala Lumpur High Court, on Dec 31, 2009 ruled in favour of the Titular Roman Catholic Archbishop of Kuala Lumpur, who is the publisher of the Herald, that even though Islam is the religion of the Federation, this does not empower the government to prohibit the use of the word ‘Allah’ in the Malay edition of the Herald.

“It also found that the word Allah was not exclusive to Muslims.”

Hence, it must be noted that the said high court verdict was a decision made in the light of Malaysians’ religious rights enshrined in the Federal Constitution, he asserted.

“The government has appealed against the decision and the Court of Appeal is yet to rule on the matter.

“But for now, the high court has spoken clearly on the issue and in the circumstances, we should respect our legal system and allow the law to take its course.”

Among those present at the news conference were PKR Sarawak vice-chairman See Chee How, who is also Batu Lintang assemblyman, and Wanita PKR vice-chief Voon Shiak Ni.