Saturday, December 3
You are at:Home»Features»Start-up to better healthcare

UNLIKE the traditional brick-and-mortar shop, today’s businesses can be Internet start-ups with funding sourced from investors the world over.

THE APPS TEAM: Dr Michelle (sixth from right) and her SmartWard team with a Silicon Valley mentor David White (third from left).

A Miri doctor stumbled upon such an opportunity on the global software scene when she entered a weekend competition for startup businesses in London on Nov 9 this year.

And finishing among the top three in the finals of Global Startup Battle (GSB) 2012 has opened the door to an exciting new venture — a global start-up business to provide better healthcare — for her and her team.

She was a top student at St Columba School, run by the Anglican parish in Miri, before leaving to do medicine in the UK.

“I came up with ideas while working at Nottingham City Hospital where healthcare could be more organised. I wanted to find out how human errors could be reduced in hospitals — like where I work,” she said.

The route to a software start-up company was not planned the traditional way when she first tried using computer software to manage the daily routine at the hospital.

According to her, most hospitals are paper-based where notes and drug charts can get lost, and doctors would spend half their time at work simply looking for these things.

She was determined to do something about the rather chaotic situation — even to the extent of trying her hands at writing software codes.

“It didn’t work, so I googled and found Startup Weekend, an event where software developers and business people come to work on an idea over a period of 54 hours,” she said of her first foray into the software world.

She found it quite daunting going to the geeky event and introducing herself as a medical doctor.

“Everyone was from the software development community with software design background and here I was wondering what would they think – like what’s she doing here,” she related.

But the participants were “very welcoming and accepting” and on the first night (Nov 9), she pitched her idea in 60 seconds.

“Seven of the IT people present found something in my idea that resonated with them, and they approached me to offer their help,” she recalled.

After assembling an international team of software developers overnight for the London Start-up Weekend (LSW) competition, organised by The London Telegraph, on the first weekend of Nov, she kickstarted the challenge with a cross platform application (apps) called SmartWard.

Her team included user interface (UI) designers from Italy and Chile, software developers from the UK, Greece and Dubai, a genetics undergraduate from Greece, and an MBA candidate who used to own her own software company in India.

“Our start-up company is based on the novel idea of using a software called SmartWard to reduce human errors in hospitals,” she said.

Due to the limited time (54 hours) to come up with a whole new business plan and product, her team – for a start — produced only one application for the Doctor’s PA (Personal Assistant). It is a task management application that improves communication in hospitals. 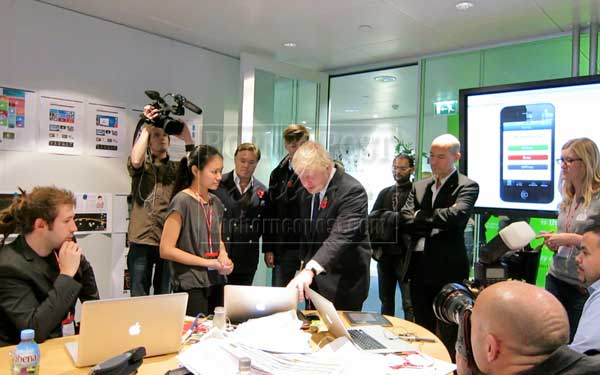 “SmartWard allows all outstanding tasks for a certain patient to be immediately transferred to the doctor receiving the patient, say from the AnE Department.

“Staff can also send tasks to each other without physically tracking one another down, giving timed reminders for when a task must be done, say a blood transfusion.

“The system can also find all doctors logged into the system at any one time — so junior doctors can quickly get help,” she explained.

Her team’s victory in the LSW event caught the attention of London Mayor Boris Johnson and was also featured in UK’s leading newspaper The Daily Telegraph which has a large media presence in US as well.

Victory also qualified her team for the finals of Global Startup Battle (GSB) 2012, touted as the biggest entrepreneurial startup campaign ever held and organised by StartupWeekend.org based in Seattle, USA.

GSB 2012 drew entries from 138 start-up weekend competitions in 61 countries around the world, involving more than 10,000 participants and 1,100 teams over two weekends in Nov.

Following another report in the Sarawak media on Nov 26 of her entry in the competition, Dr Michelle’s SmartWard apps was voted on Facebook, beating a global field of 111 video entries to take top spot with 5,025 votes by Nov 28.

The top 15 entries were further scrutinised and assessed by a panel of five judges over a one-week period.

In the final results, SmartWard came in third after runners-up Beethoven of Mexico and champions Groupnotes of Canada.

While the champions won a host of prizes, worth US$35,000, the top 15 entries, including SmartWard, will also be awarded to help with the start-up businesses of their inventors.

“We have been approached by CEOs, The Royal Society of Medicine and journalists interested in furthering our start-up company and supporting what we are trying to do for healthcare,” she revealed.

It was a remarkable achievement for a Miri girl, now a medical doctor venturing into software with a vision to improve healthcare by putting technology in the hands of professionals like doctors and nurses.

Dr Michelle’s success was first brought to the attention of local media in Sarawak on Nov 17 this year by her mother, Diana Yeoh, an educator at Miri’s Riam Road Secondary School.

She returned to Miri on Dec 22 to be a bridesmaid for the wedding of her elder brother Dr Stanley Teo and sister-in-law
Dr Eunice Oon at the Meritz Hotel.

Those interested in following her progress with SmartWard can visit www.smartwardapp.com